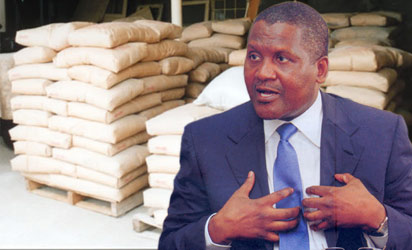 Aliko Dangote, chairman of Dangote Group and Africa’s richest person, is in talks with some of the world’s biggest oil traders to help finance his mega refinery project, Reuters is reporting.

The 650,000 barrel-per-day Dangote Refinery, currently under construction in the Lekki Free Zone, Lagos, is expected to be Africa’s biggest oil refinery upon ltuzcompletion.In its report, the news agency quoted three sources with direct knowledge of the matter as saying the billionaire businessman has held talks as recently as a month ago with executives from the world’s top two oil traders – Trafigura and Vitol.But the management of Dangote industries limited denied the talks.

“The company is not in any talks with the aforementioned oil traders to seek a loan to finance our project,” the management of Dangote Industries Ltd said in a statement sent to the news agency.Trafigura and Vitol also declined to comment on the matter.The newspaper also quoted sources with direct knowledge to have said the option of raising another $500 million from a trade house or consortium was being actively explored.

The details of a potential loan from a trading firm have not been finalised, but the trader could receive a long-term contract to supply crude and receive cargoes of refined products as repayment.Construction at the site was said to have been delayed due to COVID-19 outbreaks, hitches in getting materials, two sources with knowledge of the project said.The project cost was also said to have hit $19 billion from Dangote’s earlier estimates of $12-14 billion.Quoting industry sources, Reuters said they do not expect any products before the second half of next year.

The Nigerian National Petroleum Corporation (NNPC) placed a 20 percent minority equity stake in the Dangote Refinery for $2.76 billion.Dangote had disclosed that only one-third of the $2.76 billion deal with the NNPC would be paid in cash.He said the second payment would be through crude sales, and the last payment would be through profits made by the corporation.The report said Swiss traders like Vitol along with Nigerian firms, have cashed-in for years in gasoline-short Nigeria by supplying mega tenders and being part of lucrative crude-for-fuel swap deals for over a decade.

The Nigerian government owns four refineries but imports refined petroleum products. As a result, scarce forex is spent to ensure that there is no scarcity in the country. Government officials have expressed hopes that the Dangote Refinery being constructed will end the era of petroleum products importation in Nigeria.