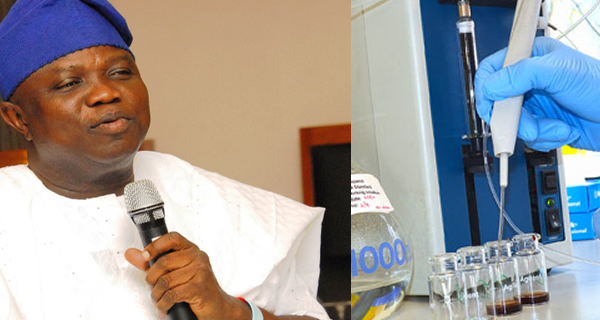 The establishment of Lagos DeoxyriboNucleic Acid (DNA) Forensic Laboratory by the Akinwunmi Ambode-led administration would not only terminate years of unresolved cases but guarantee optimal reform of justice sector. – writes Ayinla Muritala. There was a rekindled hope for justice at the magistrate’s court in Ebute Meta for the parents of Sarah, 10, who was allegedly raped by his school teacher was in Lagos on July 24, 2014, following the establishment of the DeoxyriboNucleic Acid (DNA) Forensic Laboratory in Lagos, first of its kind in West Africa.

For three years, justice had been on the snail side notwithstanding a deluge of evidence before the court as establishing a prima facie case against the accused person had been difficult following tortuous procedure for a forensic laboratory to unravel some knotty legal issues generated by issues arising from legal fireworks.

John Abraham, 27, who was accused of carrying out the dastardly act, was arraigned before the court after it was reported that he had raped the minor in the school.

After his arraignment, there was apprehension that he might eventually escape justice and go-scot free, going by the developments in the court over the case that had spanned three years.
The witnesses had lost counts of adjournments following a series of legal issues already generated over the matter before the court. This also was not different from a petty trader, Wunmi Adebayo, whose 9-year-old daughter was raped in their face-me-I-face-you apartment at Iyana-Oworo area of Lagos.

There had been countless adjournments as Adebayo had lost hope of getting justice, no thanks to the knotty issues being generated by lack of DNA laboratory to establish rapist to book.
The accused person and co-tenant, Mayowa defiled her innocent girl about three years. But rather than justice to come her way, the matter became the case of the proverbial hunter becoming the hunted.

For daring to raise the alarm and cry for a redress, Wunmi was subsequently framed up and detained in police custody with her two children, including the defiled girl.
This nonetheless, cases of rape are on the rise by the day in Lagos as road to justice becoming more tortuous.

This, experts in criminal investigation are blaming the delayed justice dispensation and near no justice on lack of a DNA Forensic laboratory in the country to technologically corroborate facts presented in courts.

According to them, evidence provided in the court must be corroborated beyond reasonable doubt- a riddle that could only be solved through technologically-proven evidence, a DNA analysis as no accused person would be convicted unless the prosecution had established that the offence was actually committed by the accused person.

Consequently, lack of forensic laboratory had kept crime rate on the rise geometrically with accused persons going scot-free in connivance with lawyers and the already compromised police officers as scores of citizens gruesomely murdered without justice taking place. Some were raped with rapists going scot-free.

Beyond solving knotty crime issues, governments had also suffered many loses following lack of a DNA forensic centre in the country such that during the unfortunate plane crashes of Bellview, Dana Air, Sosoliso, ADC Airline and other air crashes, billions of Naira were spent to identify victims burnt beyond recognition.

Besides, several paternal and maternal issues had been swept under the carpet just because of the cost of DNA analysis abroad- a development which had made many fathers to shoulder the responsibility of children born out of wedlock unknowingly since there were no evidence to prove beyond reasonable doubt that he was not the biological father.

Speaking on the slow dispensation of justice on the rape cases, Justice Sherifat Sholebo had argued that the evidence could be proved better through a DNA forensic evidence, saying that it was evident that hindrances with regard to conviction would persist until the government musters the political will to complement extant laws on rapes and defilement with establishment of forensic facilities which would give teeth to the legal resources at the disposal of victims as well as the accused persons.

Corroborating her on why most knotty crime cases may not see the light of the day, Dr Richard Somiari, President of the United States-based ITSI, Bioscience, LLC, said that courts may strike out the case if there were no forensic evidence to show that indeed the crime was committed.

The true import of this, according to him was that victims may never get justice if nothing was done on the establishment of forensic laboratories in the country to facilitate criminal investigation that would strengthen prosecution in defilement and rape cases.

But this may have finally put a stop to delayed justice arising from lack of a DNA forensic analysis to prove cases beyond reasonable doubt as Governor Akinwunmi Ambode has unveiled a world-class DNA Forensic Centre on Lagos Island.
Ambode described the world class DNA Forensic Centre as part of his administration’s commitment to ensure safety of lives and property through speedy justice dispensation.

With the completion of the centre which is the first in West Africa, Ambode said that Lagos was joining other advanced countries of the world which had embraced technology to make life easier for people in all spheres of existence, describing it as a significant milestone and a symbolic manifestation of his administration’s policies in reforming the justice sector and in line with his vision to make the State safe for residents and investors.

According to him, from inception of his administration, he had realised the fact that security was key to good governance and sustainability of investment to make life better for the people, saying that the quest for security of lives and property had necessitated his administration’s heavy investment in security equipment, recruitment and training of security personnel to assist law enforcement agencies in the maintenance of public peace and security.

Noting that the move would go a long way in resolving all form of crimes, paternity issues and others through technology which is the modern trend across the world, Ambode said “from the domestic front to our places of work; from the way we learn, to doing business, the use of technology has become a way of life.

“You will therefore understand why our administration had no hesitation in approving this project which serves amongst other things, as an effective method of bringing perpetrators of crime to book and ensuring quick dispensation of justice,” he said.

He said that the DNA Centre was another move to demonstrating the state government’s resolve to stay ahead of criminals through scientific-led investigations, expressing hope that the establishment of the facility would translate into tremendous success by reducing the incidents of crimes in the State.

“Before now, most, if not all DNA analysis and testing were performed outside Nigeria, a situation that caused longer turn-around times and an overall higher cost of bringing closure to a case. I am therefore convinced that the establishment of the Lagos DNA & Forensic Centre will improve the speed and quality of evidence collected to assist our courts in the quick dispensation of justice. This centre is a definite boost for our administration’s Justice Sector reform programme. It shows that our covenant with Lagosians to create a safe and secure State is being kept. The development of these other forensic sections at the facility will complement the DNA forensic section and enhance the level of services offered today.”

The State’s Attorney General and Commissioner for Justice, Mr. Adeniji Kazeem, said that the centre would assist the State to have a reliable DNA database that would enable investigators and law enforcement officers to identify crime patterns and suspects, and also help exonerate or convict suspects.