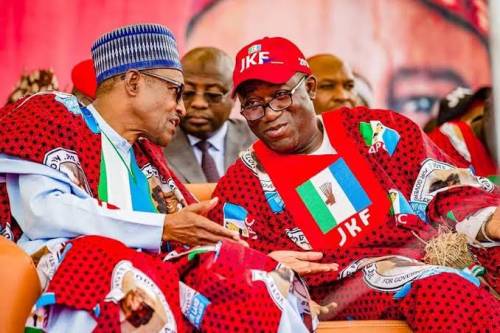 Fayemi explained that the step was necessary and a cheaper way to get 200,000 security personnel needed by Nigeria to tackle its worsening insecurity.

Governor Kayode Fayemi of Ekiti State has advised President Muhammadu Buhari to recruit members of the National Youth Service Corps into the Nigerian military to tackle the insecurity ravaging the country.

He urged Buhari to equally turn NYSC camps into security training grounds to recruit the “able” graduates to join the military in order to curtail the insecurity in the country caused by Boko Haram terrorists, others.

Fayemi, who is also the Chairman of Nigeria Governors’ Forum, at an event, said, “With this, we can use the existing orientation camps to train able graduates to reflate the security personnel under a special arrangement that will be worked out.“That way, the fund that is currently deployed to the NYSC can be used with just some additional funding, which could be sourced through a national emergency fund for the next five to 10 years.“Those who refuse to join the military services will have to serve in their community without pay.”Fayemi explained that the step was necessary and a cheaper way to get 200,000 security personnel needed by Nigeria to tackle its worsening insecurity.“By available statistics, we need a minimum of 200,000 personnel to boost the fighting power of our men,” stated the Ekiti governor.

“This number is very large and a potential financial and logistic nightmare,” he added. “Yet, we cannot delay any further. The ungoverned spaces needed to be closed up quickly by motivated men with the singular objective to save the nation; That takes us to the number two issue of financing and arming large recruitment.”Recall that in June, the Director-General of the National Youth Service Corps, Brig.Gen Shuaibu Ibrahim, says corps members are part of the national defence policy of Nigeria and can be mobilised for war if need be.The NYSC boss said, “Corps members are on reserve. They are part of the national defence policy of this country. So, where there is serious war, our corps members are educated, they are knowledgeable and they can be trained. You see the drill and so on.“You can imagine within the short three weeks in the orientation camps, the corps members are moulded.

They are like soldiers. You see female corps members blowing the army horn, playing with the military band.“So, if not for the knowledge, where are you going to mobilise such young Nigerians to train them quickly to put in their best for the country? So, corps members are on reserve. They are also part of the national defence policy.”