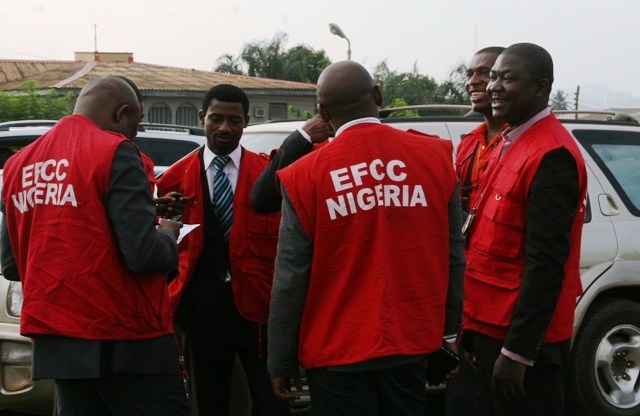 Heads of anti-corruption agencies in the country, on Thursday, agreed to transfer all their assets recovery records to a new central database that is domiciled at the Federal Ministry of Justice.

They made the pledge during the formal launch of the central database by the Attorney-General of the Federation and Minister of Justice, Mr. Abubakar Malami, SAN, at the Federal Ministry of Justice Headquarters in Abuja.

The AGF, maintained that the database which is under the Assets Tracing, Recovery and Management Regulations, ATRM, 2019, would guarantee transparency and accountability in the management of proceeds of crime recovered by investigative agencies in the country.

Malami equally launched a Central Criminal Justice Information System, CCJIS, which he described as a critical component of the National Anti-Corruption Strategy, NACS, 2017- 2021.

He said the database would ensure uniformity of process and real-time access and information feeding.

According to him,“It is to deepen our transparency and accountability. We have established that commitment through inclusion of civil society organizations, in our fight against corruption, enrolled as members of Open Government Partnership, Establish Legal Framework that establish Anti-Corruption Agencies and we are now committed in deploying technology to deepen our transparency; that is what the Central Database we are launching here today is all about.

“This present administration has yet, set another pace and I extend my gratitude to His Excellency, Muhammadu Buhari, President of the Federal Republic of Nigeria for the opportunity to serve under his cabinet to achieve this milestone.

“We will be working together, establish and re-enact transparency and accountability in Governance and management of our resources which we have committed to do by way of strengthening International Cooperation of our membership of Open Government Partnership”.

He said the Justice Ministry is developing legislation for the full implementation and operation of the CCJIS in order to ensure compliance.

“Accordingly, the Federal Ministry of Justice looks forward to working with the Judiciary at all levels, and Anti-Corruption Institution at both the States and Federal levels and the Nigerian Police in order to run the information center real-time.

“Let me reassure stakeholders that the Office of the Attorney General of the Federation and Minister of Justice under my watch is working on deploying the technology to every nook and corners of the Federation to enable the relevant stakeholders key into this 21st Century technology in Nigeria which guarantees transparency and ensures there is accountability on the part of public officers”, the AGF stated.

Meanwhile, in his remarks, the Acting Chairman of the Economic and Financial Crimes Commission, EFCC, Mr. Mohammed Umar, said the new Initiative of maintaining central database would not only allow the tracking of assets forfeited to the government but also ensure that they are effectively managed.

Umar said the EFCC would transmit all the records at its disposal into the new central database.

He said: “This new initiative of maintaining central database will not only allow the tracking of all assets forfeited to the government but will also ensure that seized assets from the different locations are managed in an effective manner to obtain the highest realizable impact and development.

“The director of assets forfeiture and recovery management of the EFCC already maintains a database which contains detailed information of all assets seized or gotten whether under preservative or restraining orders secured by the Commission.

“Therefore, it will be very easy for the commission to key-in into the new central database being inaugurated today. The directorate also performs these functions by collating data of all recoveries from various units and zones of the Commission, using a template for each type of asset. It also maintains records of court orders forfeiting assets seized from the legal department.

“Once again, I thank the honourable Attorney General of the Federation for this new initiative and wish to assure him of the Commission’s unflinching support and cooperation in ensuring that recovered assets are effectively and efficiently managed”.

Likewise, Chairman of the Independent Corrupt Practices and other related offenses Commission, ICPC, Prof. Bolaji Owasanoye, in his remarks, said there was a need for the management process of the assets recovery database to be professionalized.

He said: “It is penny wise and pound foolish to spend a lot of money to recover assets and then they waste. I think that anybody who visits typical high court premises and see vehicles that have been seized, dotting the landscape, it tells you how not to manage recovered assets.

“The problem of course is not with cash, as cash ends up with the banks. Since 2015 under this government, it has always been kept with the Central Bank. The problem is with the physical assets.

“It is therefore clinical to have information on what is available. This, of course, is without prejudice whatsoever to existing powers of anti-corruption agencies to investigate and do the recoveries, while waiting for the government to fast track the burden of management which can be very expensive.

“At ICPC we have the framework already. We have the data, so we are quite happy to key into the initiative of the Attorney General towards keeping these records”.

Prof. Owasanoye said there was a need for every law enforcement agency in the country to have the infrastructure to profile and collect biometrics of suspects, with the information fed into a central server that cannot be modified

“This is so that everybody can know if you have been the customer of police or DSS. So that with one click of the button, we can know not just those who are in prison, but those being prosecuted under the criminal justice administration”.

Meanwhile, in his goodwill message, representative of the British High Commission, Mr. Andrew Clowes, urged the federal government to ensure transparency in the management of the central database and ensure that information in the server could be assessed in real-time.

“It has to be accessible to all agencies and the process very transparent. It cannot be modified, it cannot be changed” he added.

He stressed that FG should be able to demonstrate how recovered assets are utilized to enable the citizens to understand how such stolen assets could better their lives.