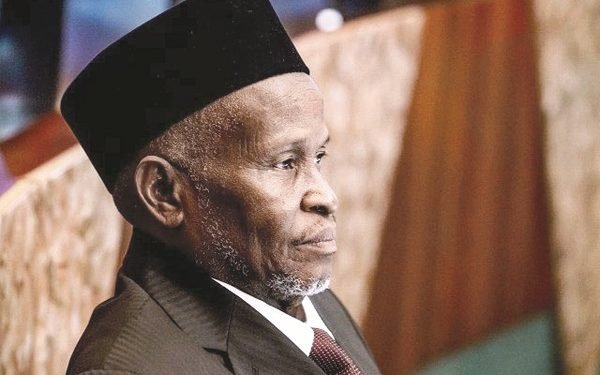 Only seven months after Chief Justice of Nigeria (CJN) Ibrahim Muhammad swore in eight new Supreme Court justices, he is calling for a constitutional amendment to decrease the supreme court’s bench from 21 to 16.
However, not everyone thinks that’s a good idea, writes ROBERT EGBE.

President Muhammadu took 11 months – from October 2019 to September 2020 – to send the names of the four Supreme Court Justice-nominees recommended to him by the National Judicial Council to the Senate for confirmation (NJC).

At the time, the Supreme Court had 12 Justices, but the law allowed for a maximum of 21.

Section 230 (2) (b) of the 1999 Constitution states:“The Supreme Court of Nigeria shall consist of such number of Justices not exceeding 21 as may be prescribed by an Act of the National Assembly.”

Last October 13, the Senate again confirmed four more justices of the Supreme Court, two weeks after President Muhammadu Buhari wrote to inform the lawmakers of their appointment and sought their confirmation.

The President received praise for the appointments, with many stakeholders, noting that it was the first time in a long while that the number of apex court justices would be so close to the constitutional maximum.

Successive governments had overlooked the need to have the maximum of 21 justices as stipulated by the constitution.

Before the appointments, the Chief Justice of Nigeria, Ibrahim Muhammad, and many justice sector experts had on different occasions raised concern over the heavy workload on the Supreme Court bench and advocated for the more hands-on bench.

But last Thursday, the CJN made a remarkable volte-face.

He advocated an alteration of the Constitution to reduce the maximum number of Justices of the Supreme Court from 21 to 16.

To balance whatever problems this might cause, Muhammad called for an increase in the number of Justices of the Court of Appeal to not fewer than 100.

The number of the Court of Appeal justices is pegged at 49 under Section 237 of the Constitution.

Muhammed further suggested that the age of anyone to be appointed as a Justice of the Supreme Court should not be less than 25 years of post-call to Bar.

To further strengthen his position, the CJN also suggested that appeals from the Court of Appeal to the Supreme Court should be by leave of the apex court, with an additional requirement that the application for leave could be determined by three Justices of the Supreme Court, sitting in the chambers.

These form part of the 45-point proposals contained in the CJN’s submission in Abuja before the Senate Committee on the review of the 1999 Constitution on behalf of the Judiciary.

In the 17-page submission, entitled: ‘’Input by the judiciary to the proposed alteration to the 1999 Constitution (as amended),’’, the CJN asked that the Constitution be also amended for the seat of the Secretary of the National Judicial Council (NJC) to be placed at par with that of the Clerk of the National Assembly.

Problem with the CJN’s proposal

The courts are notorious for their slow pace of justice dispensation and backlog of cases.

Dongban-Mensem said out of this number, only 345 appeals – eight per cent – had been scheduled for hearing. The 345 comprised 289 commercial, 10 human rights, and 46 criminal appeals.

The court has 20 divisions with most of them facing similar problems and the PCA constituted seven special panels to expedite hearing in all pending appeals.

The CJN’s proposal will thus work just fine for the appellate court, but it will probably be a different ball game at the apex court.

Like many senior lawyers, a Senior Advocate of Nigeria (SAN) Rotimi Jacobs is familiar with the problem of cases backlog.

He observed that the Supreme Court might still be hearing cases filed in 2013, thus the CJN’s proposal might be problematic unless there are other recommendations that are necessary to reduce the court’s workload.

“If the suggestion will go with a reduction in the jurisdiction, I will agree. But as it is today, no one can make that recommendation. When the Supreme Court is hearing appeals of 2013, 2014 up to 2016 in 2021? We have appeals of six, seven years pending there.”

Like Jacobs, another SAN, Mr Seyi Sowemimo also noted that reducing the number of justices might worsen the problem of cases backlog.

“I don’t see the justifications for reducing numbers. If he were talking of increase, I would have said yes. The advantage of the numbers is that there is a lot of backlog of cases and one is hoping that the greater number of justices will be able to assist in reducing it.

“With the backlog, I’m not too sure but I expect that the Supreme Court is dealing with appeals that are even around 2015 or even earlier than that. If you are reducing the number how does that help the situation, especially when we have already increased the number of justices of the Supreme Court? We can’t retire them in midstream.”

Sowemimo approved of the proposal for the appellate court.

He called for deeper structural reforms. He observed that what many stakeholders have been considering is the creation of state appellate and even supreme courts.

“What I know is that the proposal by several people is even to restructure the court system, to have more courts like states court of appeal, controlled or run like a state organ and it would not be tied to the apron strings of the federal judiciary.

“The federal courts would now have only limited jurisdiction which is outside the one that the state court of appeal can handle. The needed reforms are not along the lines of what the CJN is looking at it. What many have suggested is more like a restructuring of the court system.

“The general idea is that we should restructure the court system with each state having a court of appeal and then the federal level will now have limited cases to deal with.”

Some of the stakeholders Sowemimo referred to may have included Chief Emeka Ngige (SAN) and Professor Ernest Ojukwu (SAN), who have on several occasions advocated proposals for justice sector reforms.

Ngige, a 2012 Nigerian Bar Association (NBA) Presidential Election contestant, suggested in 2018 several ways out of the problem of cases backlog at the apex court, among other reforms at the court.

He said: “Firstly, there should be full compliments of justices on board… All the vacant seats in the apex court should be filed up forthwith.

“Secondly, the Nigerian constitution should be further amended to allow for the appointment of adhoc justices so as to allow retired justices and erudite senior advocates to be invited from time to time to help decongest the court.

“In the U.K., her Constitutional Reform Act 2005 has a provision for acting judges to be appointed from a pool of judges of lower courts or of retired jurists referred to as ‘supplementary panel’ to sit with the regular justices if the need arises. If we have similar provisions here, I can assure you that the backlog of appeals in the Supreme Court will be cleared within two years.

“The third suggestion is that the registry of the Supreme Court should be thoroughly reorganised. The Federal Judicial Service Commission should get one or two reputable auditing firms like Arthur Andersen or PWC to help recruit staff that will man the registry of the apex court.

“The crop of personnel there lacks the capacity to cope with the challenges of court administration.”

Ojukwu is a past Deputy Director-General and Head of Campus of the Nigerian Law School, Augustine Nnamani Campus, Agbani Enugu, and also a 2018 Nigerian Bar Association Presidential Election Contestant,

He said: “There are seven solutions – 1) Constitutional amendment that caps the kind of cases that can go up to the Supreme Court. 2) Establish an Apex court for states like a Court of Appeal. 3) Appoint more justices of the Supreme Court up to the number prescribed by law. 4) Change our legal education to justice education to develop lawyers that respond to true issues of access to justice as a responsibility, and 5) Address the perennial infamous conduct of lawyers who use our legal system and procedure to abuse the legal system with frivolous litigation and appeals. 6) Encourage ADR and 7) Change the Rules for the appointment of SANs that encourages the use of large quantity of litigation for qualification for the privilege”.

How the CJN’s proposal can work, by Quakers

Norrison Quakers, SAN, dissected the CJN’s proposal and made suggestions for how it could work.

He noted that the judiciary is the third arm of the government of the federation by virtue of Section 6 of the Constitution of the Federal Republic of Nigeria, 1999 “as amended”.

Quakers said: “In the hierarchical structure of courts, the Supreme Court is the highest in the land; it is seen as a court with finality to its decision as such, it must be occupied by people of proven integrity, a repository of wisdom and sound legal knowledge.

“The Supreme Court as a policy Court must not be crowded, which explains the use of the word in Section 230 (2)(b) of the 1999 Constitution (as amended) ‘such Justices of the Supreme Court not exceeding 21 as may be prescribed by an Act of the National Assembly.

“The provision is very clear, the Justices of the court at any point in time must not be more than 21, but if the need arises to tinker with the provision, the Legislature will do the needful. The composition of the court is to reflect federal character.

‘Court of Appeal be made a final court’

He reasoned that if the suggestion to reduce the number of Justices in the Supreme Court is to be implemented, “it then means that the Court of Appeal be made a final court over appeals arising from civil disputes and criminal matters, leaving the Supreme Court as a policy court to hear and determine matters of constitutional significance.

“The number being suggested for appointment of Appeal Court Justices, I believe is high. A more realistic number should be 60, because of geographical spread factoring the seeming federal system or structure and bearing in mind the industrial and commercial nature or status of some of the states in terms of disputes arising from transactional relationships.

“The post-call requirement should be pegged at 15 years as opposed to 12 years as is enshrined in the constitution.”