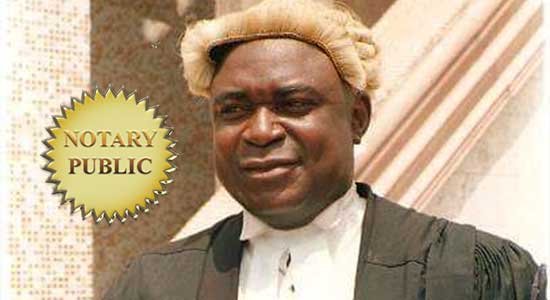 The Nigerian Bar Association (NBA) has said it would investigate a Notary Public, Anthony Idanosi Eruage  over the alleged assumption of judicial powers not ordinarily exercisable by Notaries Public by issuing a reversal order to a bank.

Mr. Eruaga had issued an Order dated 26th of MAy, 2021 to Guaranty Trust Bank directing the Bank to reverse the sum of N551, 250 belonging to one Deborah Oluwa Bukola Babatunde in a strange order which he stated was issued upon “the application made orally by the Applicant.

In a statement titled; ALLEGED BREACH OF RULES OF PROFESSIONAL CONDUCT BY ANTHONY ERUAGA ESQ  issued by the National Publicity Secretary of the NBA, Dr.  Rapulu Nduka, the NBA frowned at the action of Mr. Eruaga while urging its memebrs to desist from all actions that are likely to bring dishonour to the Legal Profession.

The statement reads in part:

The attention of the Nigerian Bar Association (NBA) was recently drawn to a ‘Reversal Order’ purportedly made by a certain Notary Public – Anthony Idanosi Eruaga Esq., directing a commercial bank to reverse funds allegedly erroneously paid into a customer’s account.

By this act, the said Anthony Idanosi Eruaga, Esq seemed to assume judicial powers not ordinarily exercisable by Notaries Public.

The leadership of the NBA frowns at such conduct, and wishes to state that it will investigate same and keep members informed about the outcome and further actions to be taken.

The NBA reiterates that it will continue to take every step to ensure that the Legal Profession is not brought to disrepute, and accordingly appeals to all lawyers to kindly desist from all actions that are likely to bring dishonour to the Legal Profession.