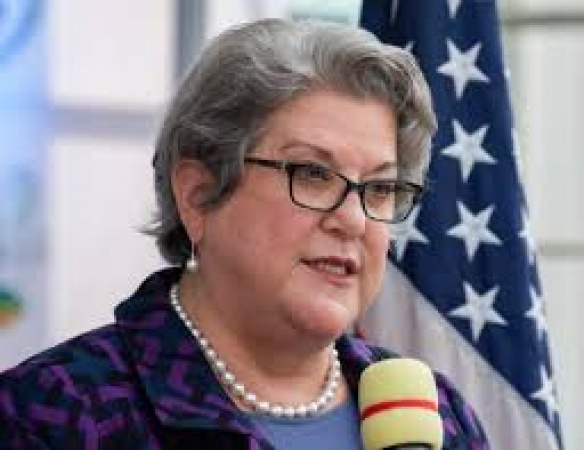 The United States of America (USA) has adopted a major foreign policy change that will transform civil society organizations (CSOs) in Nigeria into a hub of interactions after the EndSARS, PRNigeria has learnt.

This is in pursuit of its strategic interests in Nigeria which some Nigerian diplomats have raised some concerns.

The diplomats expressed concerns over the motives of the US government on the new initiative in Nigeria.

The US Ambassador to Nigeria, Mary Beth Leonard, recently opened the first “Window on America” Community Center at Lekki, the epicentre of the EndSARS protests, last year.

At the virtual Centres, young people would be afforded the opportunity to develop their ideas, as well as leadership and entrepreneurship skills, through programs and workshops designed, especially for them.

Beth, said visitors to the window will include students, teachers, entrepreneurs, academics, journalists, civic organizations and community leaders, who will access its services, programs and resources “at no cost”.

“In the next few months, 12 more will be opened in major cities across the country, including Abeokuta, Awka, Benin City, Enugu, Osogbo, Uyo, Zaria, Minna, Dutse, Makurdi, Gombe and Lafia,” the ambassador disclosed.

One of the seasoned Nigerian diplomats, who will not want to be named, told newsmen that the US had since aligned with the #ENDSARS movement, as it called for good governance, democracy and respect for human rights, from the country’s ruling political class.

“There have been increased advocacy for a foreign policy shift among leading US thinktank and lobbyists, led by the US Center for Strategic and International Studies (CSIS), ranked number one think tank and bipartisan organization that “strives to define the future of national security”; and Freedom House, another American think tank devoted to the support and defence of democracy and embattled human rights defenders” around the world,” he said.

Continuing, the diplomat added: “The CSIS Africa Program has been churning out other reports providing a rationale for the unfolding change in US foreign policy. A November 2020 memo titled Nigeria: Learning from #EndSARS – A New U.S. Policy Toward Nigeria, dismissed the Trump Administration’s US-Nigeria policy as inert, ineffective, and lacking a moral compass.

“It identified “a bigger strategic priority” for the Biden Administration in building a strong, values-based relationship with the Nigerian people or “people-to-people diplomacy”, a veiled pointer to ongoing elevation of non-state actors and CSOs as priority partners in pursuit of US interests in Nigeria.

The diplomat said: “The world recently watched with shock, when pro-Donald Trump supporters stormed the Capitol Hill, Washington DC, the seat of the United States Congress and wreak havoc when the US Congress was in a joint session.

“The violent protest at Capitol Hill saw protesters smashing doors and windows with at least 5 people including a policeman killed. A similar incident happened in Nigeria during the EndSARS protests when a group of unruly violent protesters and anarchists destroying public and private property and killing security personnel among others in Nigeria.

“Is this not being irrationally being complacent with unfortunate double standards by deliberately refusing to apply the same standards to other countries?” the diplomat asked.