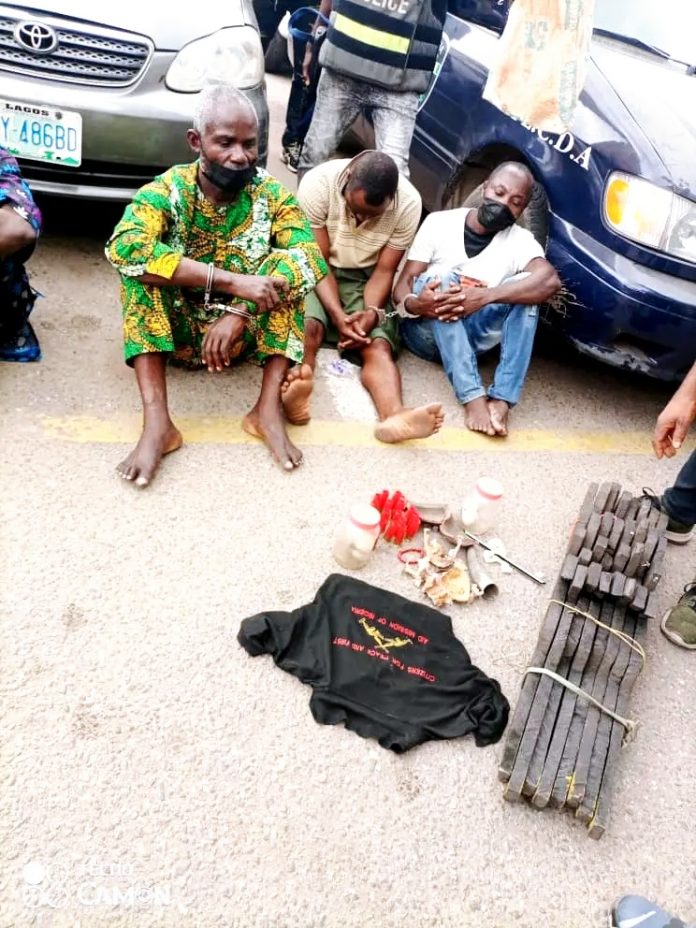 The Lagos State Police Command has uncovered an illegal security outfit where people are killed and buried in shallow graves in Ikorodu area of Lagos.Arrested were three suspected members of the illegal outfit: Israel Okon,(42); Joe Nwoke Charles(35)and Ishola Kazeem,64.

Recovered in the outfit were some human skeletons, 18 expended cartridges, eight dummy wooden guns, charms, a banner with the inscription of the name of the outfit : ‘ Citizen For Peace and First Aid Mission of Nigeria’ and the outfit’s operational Golf car with plate number USR 158 HP.

One of the human skulls was recovered from Kazeem , who confessed to be a herbalist.Explaining how the suspects were arrested , the Commissioner of Police , Lagos State Police Command, Hakeem Odumosu, who was recently promoted to an Assistant Inspector General of Police , during the end of the year briefing ,yesterday, at the command headquarters Ikeja, said, ” Detectives attached to Sagamu busted the camp based on credible intelligence report.

Innocent citizens are arrested , detained and tortured in the illegal security outfit .

Investigation revealed that the illegal outfit was recruiting and training young Nigerians who were kitted with uniforms and accoutrements similar to those of government agencies in Nigeria.While clamping down on the camp of the illegal outfit at Sagamu road, at about 10am, on December 11,2021, a shallow grave was discovered where human skeletons including a skull of a victim who was allegedly arrested and tortured to death were found.

During investigation, some suspects including a native doctor who is a member of a gang allegedly using the parts of their victims for ritual purposes were arrested”.One of the suspects, Okon, Said that he was invited to work as a private guard in the outfit, only to discover more than what he bargained for.According to him,” I was deployed to a hotel at Itaruwo,on Shagamu road , to work as a guard. But I discovered later that they were involved in rituals.I witnessed the death of only one person.

The person was a robber who went to rob at the hotel I was working. Owner of the hotel told our Commander to take the robber to the police station but he took him to our base, where the man died. My Commander told me to dig a grave where the robber was buried. Thereafter, he detained me at the base because he didn’t want me to expose him.One week later, our Commander brought out the corpse and cut off its head. He took it to a herbalist”.

The 64-year-old herbalist, Kazeem, admitted to have collected the skull. He said he intended to use it for concoction for the treatment of migraine and headache that had defiled medical treatment.AIG Odumosu said the suspects would be charged to court .