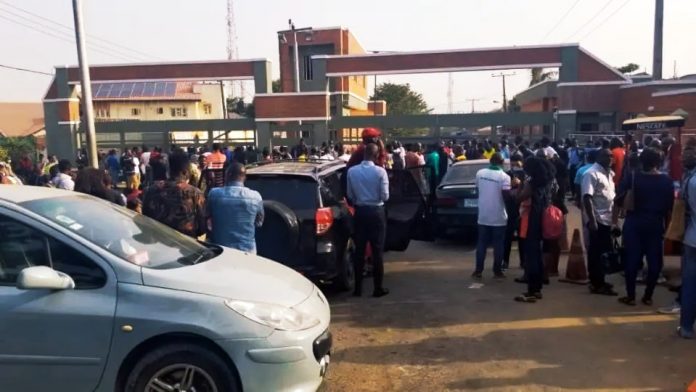 The gates of Phase 2, Magodo Estate, in Lagos, have been reopened after a siege laid by Police officers in a move to demolish some houses in the area.

Some police officers, said to have been accompanied by a crowd of mainly youths, arrived at the estate with bulldozers, Tuesday evening, and started marking some houses in the estate with the inscription: ‘ID/795/88 possession taken today 21/12/2021 by court order’.

The stern-looking Police officers were executing a Supreme Court judgement, which ordered the Lagos State government to give back 549 plots to the original owners of the area before it was fraudulently acquired over 38 years ago.

Yesterday morning, members of the Magodo Residents’ Association, MRA, locked up the gates leading to the exit and entry points of the estate to resist what they described as “forceful takeover” and an attempt to demolish houses in the area.

The development left some residents stranded, as no human or vehicular movements were allowed in and out of the estate. However, the two gates were opened in the afternoon with people and vehicles moving freely.Tunji Abdulhameed, Legal Adviser of MRA, told The Cable that residents of the estate were not aware of any court verdict issued in favour of the Shangisha Landlords Association to demolish houses in the community.

Abdulhameed said the only court verdict residents are aware of is to the effect that the Lagos government should allocate 549 plots of land to the Shangisha association.

“We are not aware of any court order which allows for any demolition of properties in this estate. We asked them to show us papers, they refused to show us the paper. We are aware that they obtained an order against the Lagos state government, the judgement which people believe is fake as no specific definition and no properties were mentioned.

“What the judgement said is that the Lagos state government should allocate 549 plots to them. As at today, no plot has been allocated,’’ he said.Bajo Osinubi, chairman of MRA, reportedly said they decided to open the estate’s gates owing to the promise made by Governor Babajide Sanwo-Olu that the state is “on top of the case.”