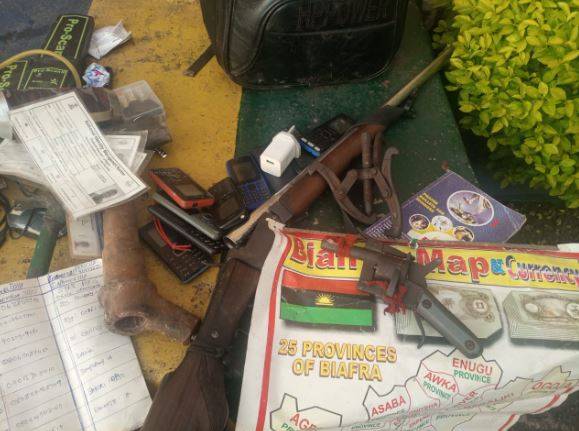 During their arrest, the combined team of police, the military and DSS, also recovered assorted arms, ammunition, military uniforms and many other incriminating exhibits from the criminals.

In a statement signed by the Police Public Relations Officer, SP Chris Anyanwu, the team “after dislodging the criminal elements and taking over the ground, the camp which they christened “IGBO BU IGBO TRAINING SCHOOL CAMP”, was ransacked and destroyed. Equally, a wooden bridge under construction intended to aid the miscreants in their coming and going, was dismantled”

“In a bid to sustain the laudable tempo of proactiveness with the desire to rid the State of crime and criminality especially as the Yuletide/Political seasons have set-in, the Ebonyi State Police Command under the leadership of CP Aliyu Garba, armed with credible intelligence, stormed three big Camps of the outlawed IPOB/ESN operatives (including a new one under active construction), located in a thick forest close to Opeke River, in Omege village Agba Community, of Ishielu LGA.

“The operation spearheaded by the Command’s Tactical teams and assisted by the Military and DSS in the State, was prompted by quantum pieces of reliable evidence, professionally elicited from interrogation of Nnamdi Ngwuta Obaji aka State Commander No. 3 and another operative of the outlawed group, Felix Ogudu who were earlier arrested.