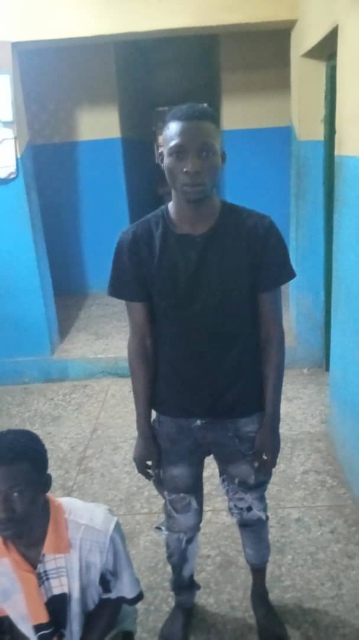 In what appeared like a parting gift from the now transferred Ejigbo Divisional Police officer, CSP Olabisi Okuwobi, she facilitated the arrest of two suspects, Quadri Azeez, 22 and Sunday Odunayo, 23, who allegedly gang raped an 11-year old girl, Miss Favour Okechukwu, to death in Ejigbo, Lagos.

The media had reported how Miss Favour Okechukwu was gang raped to death by four men, who lured her to a room at Olarewaju Street, Ejigbo area of Lagos, forcefully penetrated her and she bled profusely from her private part.

Following the gang rape, the victim became unconscious, eventually died and she was abandoned by the suspects as they fled after the dastardly act.

The Police were said to have determined to arrest the fleeing suspects and their efforts paid off when one of them, Quadri Azeez, was tracked and arrested in Ogun State after he reportedly went for an armed robbery operation and was caught by the local vigilante, who identified him.

He was subsequently handed over to the Police at Ejigbo Division, who interrogated him and it led to the arrest of Sunday Odunayo in his hideout remaining the two other suspects now at large before the DPO, CSP Olabisi Okuwobi, was transferred.

The suspects were said to have been transferred to the SCIID, Panti, Yaba, Lagos for further investigation while efforts are been made to arrest the remaining two suspects now at large.

The report of the arrest of the suspects has attracted commendation to the Police at Ejigbo Division from the residents, who had been protesting seeking for justice for the innocent girl.

The 11-year old victim had returned from school and her mother sent her to go and buy a popular snack, gala, from a nearby shop in the area around 3pm on that day when she was lured to a room where she was engaged in marathon sex, she became unconscious and eventually died.

The suspects fled abandoning her inside the room until when the father returned from work and started looking for her. It was then she was discovered in the room naked and dead.

The Ejigbo Police Division was contacted over the dastardly act and the DPO, CSP Olabisi Okuwobi, mobilized her officers, they raced to scene and discovered the lifeless body of the girl in the room, which was then retrieved and deposited at the mortuary for autopsy report.

The Police commenced investigation, which has paid off with the arrest of Azeez and Odunayo, who now risk death sentence if they are charged to Court, tried and found guilty for defilement and murder.

Another JSS 3 Student Gang-raped in Lagos