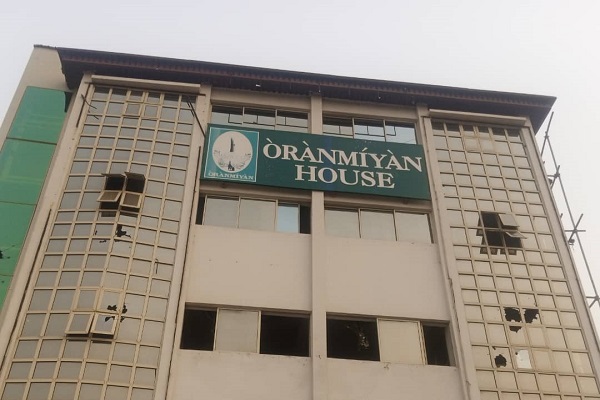 Five hoodlums on Thursday evening attacked the campaign office of Minister of Interior Rauf Aregbesola after factional members of the All Progressives Congress (APC), Osogbo held their weekly meeting.

It was learnt that the hoodlums invaded the premises of the campaign office Aregbesola used before his emergence as Governor around 5:30 pm.The hoodlums were armed with guns and started shooting at the building located around the Gbodofon river, including other properties within the premises.

The attackers arrived at the scene shortly after members of the All Progressives Congress (APC) concluded their weekly factional meeting at the venue. It was observed that 39 bullets were fired at the transformer within the premises with some glasses of the building were shattered.

An eyewitness within the premises Abosede Oluwaseun said: “Shortly after the meeting today, people have already left, they came in two vehicles; one red Sienna car and a bus, parked on the other side of the road.

“The occupants move towards the building with pump-action rifles and started shooting. It is very difficult to count their number but going by the over 30 cartridges on the floor, their number is large, they started shelling the building.

“They also shot sporadically at the transformer to set it on fire so that the whole building will be razed but luckily the canopies caught fire. The people we mobilised quickly extinguished the fire after the hoodlums escaped through Gbogan/Osogbo road.

“Their drivers were on standby, we were able to count six pump-action and other weapons. They operated for 15 minutes.”