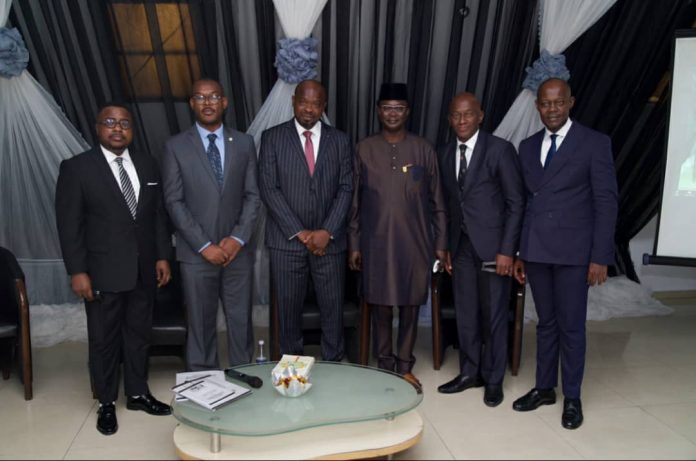 For Mr. Folabi Kuti, SAN, one of the newest Senior Advocates of Nigeria, it was a case of the proverbial prophet being honoured among his own kindred, as the commercial law firm of Perchstone & Graeys LP, where he serves as a Partner, honoured him with a series of activities to celebrate his conferment with the most exalted rank in the practice of law in Nigeria, which took place at the Supreme Court in Abuja on Wednesday, December 8, 2021.

The highlight of these activities was a symposium and public lecture held under the title, ‘Resolving Disputes in an Environment Disrupted by Technology,’ for which a stellar cast of speakers and panelists was assembled to interrogate a couple of topics – namely, ‘Technology As An Enabler in Resolving Disputes,’ and ‘The Devil Is In The Details – International Best Practices in Labour And New/Evolving Relations In Nigeria.’

In his welcoming remarks, Mr. Ugochukwu Obi, stressed the fact that the issues being raised in the two discussion panels were very much in line with the passion points of Kuti, the new learned silk, whose concern for both dispute resolution and labour relations is well-known. Obi recounted the many ways in which disruptive new technologies such as artificial intelligence (AI), machine learning, internet of things, block chain, etc are redefining these two areas – and the many grey areas this new paradigm has thrown up in recent years. The continued relevance of human lawyers, he added, would depend on how well they navigate the legal conundrums surrounding the advent of technology in these and other practice areas.

The moderator of the first session, Mrs. Adeyinka Aroyewun, who serves as the Director of the Lagos Multidoor Court, was joined on the panel by Mr. Imo Ukpong, the CEO at Apace Innovations Solutions Ltd., an IT firm; Dr. Ayo Adegboye, the CEO at Arravo, another IT solutions firm; Mr. Tolu Aderemi, a Partner at Perchstone & Graeys LP; and Ms. Bode Abifarin, who is the Group Chief Operating Officer at Flutterwave, a payment solutions and Fintech company – who participated virtually at the session.

Firing the opening salvo in the panel discourse, Mrs. Aroyewun described technology as the ‘4th party’ in the alternative dispute resolution (ADR) process. The added benefits of confidentiality, privacy, the use of breakout facilities, waiting rooms, etc, she said, cast technology in the role of a mediator all by itself.

In his contribution, Ukpong listed the many ways (or touchpoints, as he called them) in which tech has helped firms to retain customers – such as by categorizing customer complaints into ‘pockets’ for easier responses and access to solutions. He called on all sectors of the Nigerian economy (including public sector MDAs) to develop online databases in order to track basic information about their personnel, operations, and so forth.

Another panelist, Dr. Adegboye called attention to the experiential nature of online engagement. Addressing the issue of tech failures, he described them as squarely human failures. Garbage in, garbage out is a common refrain in the tech world. Garbage here means not just wrong information but also the subjective, biased notions that sometimes colour some people’s online engagements. On the continued relevance of human lawyers and mediators, Adegboye made it clear that in mediation sessions, for example, a lot of nonverbal communication often goes on, which no technological device can pick up, let alone interpret. But the technology-savvy lawyer/mediator stands an advantage over who is not so adept.

Disputes arise from differences in expectations, said Bode Abifarin of Flutterwave in her remarks, but the use of tech enables a true knowledge of every step of a given transaction, and therefore the source of the dispute – be it an incorrect assessment, reader inconsistencies, or outright fraud, etc. At Flutterwave, she said, a dashboard helps to track transactions from uploading to delivery to clients.

Aderemi of P&G focused his contributions on the commercial value of tech, especially as an enabler in sector-focused ADR and ODR (online dispute resolution) mechanisms.
In her summation, the moderator, Mrs. Aroyewun spoke of the controversy surrounding the issue of awards emanating from ODR, and recent efforts by NITDA, the technology regulator in Nigeria, to come up with a framework guiding the use of tech in these areas. She lamented what she called the ‘abuse’ of arbitration by lawyers using practices better suited to litigation (including tactics meant to delay the arbitration process unduly), saying mediators and arbiyrators would do well to keep in mind that clients need speedy outcomes from the ADR process.

The lively panel session was followed by an equally lively question and answer session, in which participants expressed interest or concern over a range of issues thrown up during the discussion – such as the mode of training of arbitrators and mediators; and the use of tech to decongest court processes (and the possibility of getting the buy-in of Judges).
The first session ended with a vote of thanks by Mr. Folabi Kuti, SAN.

The second panel discussion, which was moderated by Steve Nwabueze, Head of Litigation at Perchstonr & Graeys LP, featured two in-person and three virtual participants. The Chairman of the session and President of the National Industrial Court of Nigeria, Hon. Justice (Dr.) Benedict Kanyip, was one of the virtual participants, as were Prof. O. D. Amucheazi, SAN, an academic at the Nnamdi Azikiwe University in Awka, Anambra State and founding Partner at the law firm of Amucheazi, Ozioko and Co, and Mr. Olusegun Mojeed, President of the Chartered Institute of Personnel Management (CIPM). The in-person participants were the President of the Nigeria Labour Congress (NLC), Comrade Ayuba Wabba and Mr. Thompson Akpabio, who stood for Mrs. Celine Oni of the Nigerian Employers Consultative Association (NECA).

Welcoming participants to this second session, Mr. Osaro Eghobamien, SAN, described the investiture of Folabi Kuti, SAN as only the beginning of his decisive interventions in the area of labour relations in Nigeria and beyond. This, he said, was very much in line with the guiding philosophy of Perchstone & Graeys LP, a company which operates with the mentality of a marathon runner armed with a willingness and readiness to see, and exploit, opportunities even in the midst of disruption – especially by the new technologies of the 21st century.

In his opening remarks, Justice Kanyip began by giving a brief overview of the internationally recognized concept of trade unionism (as also enshrined in the NINC Act of 2006 and the famous judgment by the late Justice Niki Tobi, JSC). He went on to spell out what a trade dispute was according to relevant laws, and what it wasn’t, and why the legal industry must be responsive to the shifts in these concepts over time – many of them driven by technology and the new work paradigms it has created. Justice Kanyip also tried to debunk the notion – especially harboured by employers – that the NICN, and its judgments are skewed in favour of employees as opposed to employers. Unfair labour practices worldwide, he averred, are usually the province of employers especially in capitalist economies, and in any case, employees make up the vast majority of complainants at industrial courts. But the court recognizes that employees, too, can be guilty of unfair labour practices. However, the NINC is unwavering in its commitment to protect the rights of all in the often uneasy relations between capital and labour, and to be an objective arbiter and interpreter of the law at all times.

Prof. Amucheazi spoke at length on the guiding philosophy of the NICN, one of whose core objectives is to make it harder for employers of labour to hire and fire at will, or to resort to such unfair labour practices as triangular employment, outsourcing, casualisation, etc. On the question of workers in the digital economy (such as drivers on ride-hailing platforms like Uber, for instance) and whether they are employees or contractors, the university don recognized the current efforts being made to amend inhe nation’s labour laws to accommodate such workers, and called on the Federal Ministry of Labour, Employment and Productivity to rejig its regulatory mechanism to this effect. He also addressed the concerns of groups like NECA by calling for a balance between awarding compensation to laid-off workers and fairness to employers in the size of the award costs. He also called for vigilance on the part of stakeholders to guard against dubious applications for compensation.

The third virtual panelist, Mr. Mojeed of CIPM saluted the NICN for its decisive interventions in labour disputes, saying that the fear the Court’s judgments is the beginning of wisdom among employers in Nigeria. He also recognized the role of other ‘arbiters’ such as social media and the Covid 19 pandemic in defining the concept of work and called for appropriate laws to accommodate the changes brought about by these arbiters. He also touched briefly on the ongoing enforcement of vaccine mandates, especially as concerns public sector workers, and called instead for a greater emphasis on moral suasion.

Speaking for Nigerian employers, Akpabio of NECA invoked relevant laws – including the International Labour Organization (ILO) Decent Work Agenda, to make the point that the worker’s right to go on strike should not be weilded frivolously..

The NLC President, Comrade Wabba, in his contribution, also began by invoking ILO statutes (including those not yet ratified by the Nigerian legislature but nevertheless binding on the country as a signatory to the ILO Charter). The arbitrary actions of employers, he said, was contrary to modern industrial practices and labour relations. Labour, he asserted, is not a commodity, and therefore not subject to certain actions by employers or government. Wabba applauded the widening of the concept of ‘worker’, ’employer’, etc as provided for in the NINC Act of 2006 and touched on by Justice Kanyip in his earlier remarks. Hitherto, he said, the narrow definitions of these terms constituted a severe hindrance to the pursuit of justice. Insisting that workers rights are integral to human rights, Comrade Wabba called for a constitutionalization of workers rights – rather than the present reliance on Acts, decrees or particular judgments.

Like the first session, this second panel discourse was followed by another lively Q&A session, in which concerns were raised about the NLC’s stance on issues such as the impending deregulation of the nation’s petroleum industry and the state of the nation in general.
Mr. Folabi Kuti, SAN, again brought the event to a close with a vote of thanks as he called on participants to help themselves to the delicacies on offer at the Gala to follow.