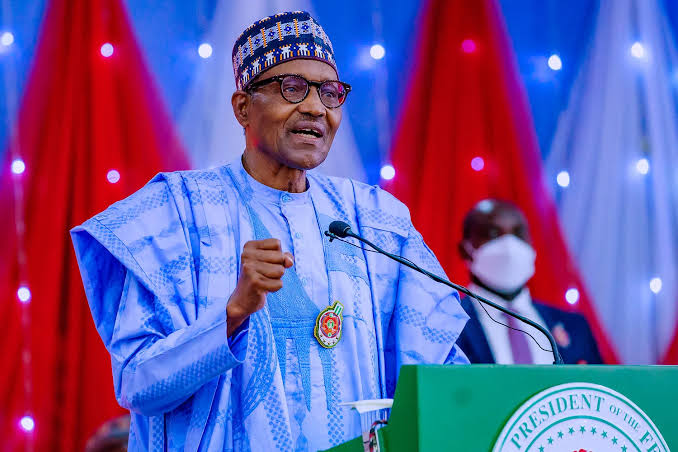 Nigeria’s President, Muhammadu Buhari has reacted to the viral claims that made rounds over the years that he was dead.

He described the claim that he was dead and his supposed body double, ‘Jibril Aminu from Sudan’ as the one occupying the presidential villa in Aso Rock, as an expensive but funny joke.

Buhari reacted to the claim in a documentary shown on Friday night at a private dinner organised by his family and very close associates, marking his 80th birthday tagged “Celebrating a Patriot, a Leader, an elder statesman”.

The President said some Nigerians are skilled in creating humour to feast on something they do not understand or comprehend.

He described the rumour as the work of some mischief makers to demonstrate their cheekiness.

Asked by the interviewer if he heard about the crazy rumour a while back that he was not Buhari, he replied smiling, “Yes! People said I am somebody from Sudan. I didn’t bother with the name. Nigerians have mischievous ways of explaining themselves.”

Asked how he finds such things funny, the President said: “No. it’s not funny because those who made those statements, just want to be cheeky. They want to distract attention from the main issue.

“Our main issue is to do the infrastructure, make people aware that they need to work hard to live well. They just want to enjoy life without earning the respect of their community and so on.”

Buhari equally stated that he will not miss Aso Rock much because he is being harassed and that his efforts to make the country better is not good enough and appreciated by some people.

Buhari said: “I wonder if I am going to miss much. I think I’m being harassed. I believe I’m trying my best but still, my best is not good enough. Because there are people around that think that they can intimidate me to get what they want instead of going through certain systems to earn whatever they want to earn. And they are some people who want to be clever by half.”

President Buhari revealed that he lost two of his children by his late wife to sickle cell anaemia and that was why when he wanted to remarry, he insisted the second wife must be AA genotype so that his children will not inherit the S from his AS genotype.

Vice President, Yemi Osinbajo while proposing a toast for the celebrant, described him as a forthright, good and kind man, as well as an exemplary leader.