PEOPLE At the HELMs 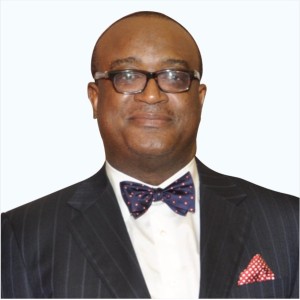 Becomes the 27th President of NBA

His election as president of the NBA has been applauded by members of the business law community, who have expressed optimism at the incoming President’s ability to move the Nigerian bar forward. They are also counting on him to accomplish his vision for the bar as stated in his agenda, which includes the reform of legal education, proper structures to improve the revenue base of Nigerian lawyers, amongst other things.

He is an active member of The Nigerian Bar Association and was until his election, the Chairman of The Database and Documentation of Nigerian Lawyers Committee, a committee set up by The Nigerian bar Association. He was appointed a Notary Public in 1994 by the Chief Justice of Nigeria.

He has acted as Lead Counsel in a host of decided landmark cases in Nigeria. He is actively engaged in Appellate Litigation and has argued several contentious matters before The Supreme Court of Nigeria which are widely reported in the law reports such as the locus classicus in Labour Law; Omagbemi v. Guinness, as well as Sunday Ndidi v. State and Ilekwoba v. State to mention a few.

In recognition of his modest contribution to the development of the law in Nigeria, The Legal Practitioners Privileges Committee elevated him to the rank of Senior Advocate of Nigeria in 2007.

He is a member of the Board of Directors in a host of companies with vast interests in Construction, Information Technology, Engineering, Real Estate and Fast Moving Consumer Goods (FMCG).

History was made in Lagos State on recently as Governor Babatunde Fashola swore in Hon. Justice Funmilayo Atilade, the younger sister of the immediate past Chief Judge, Justice Ayotunde Phillips, as the new Chief Judge of Lagos State.

Sixty-two year old Atilade, who took her oath of office at the Adeyemi Bero Auditorium, Lagos State Secretariat, Alausa, Ikeja, is the fifth woman to serve in that capacity and the 15th Chief Judge of the state.

Until her recent appointment, Hon. Justice Funmilayo Atilade was a High Court Judge.

It was also the first time in the judicial history of Lagos State that siblings would succeed each other.

The older Justice Phillips had held the position for two years before retiring on July 26, 2014 after attaining the statutory retirement age of 65.

The Lagos State Governor Babatunde Raji Fashola, SAN urged the new chief judge to adhere strictly to the rule of law in the discharge her duties.

Lagos State Attorney General and Commissioner for Justice, Mr. Ade Ipaye, said Justice Atilade was strongly recommended by the National Judicial Council (NJC) and her appointment was also reviewed by the state assembly and she was found worthy.

The immediate past Chief Judge and her successor are both daughters of the late Justice James Williams, who was a judge in Lagos State.

Asue. A. Ighodalo named as Chairman

of NBA-Section on Business Law and

The Section on Business Law welcomes Mr. Asue A. Ighodalo of Banwo & Ighodalo as the Chairman of the NBA SBL.

Until his election as the Chairman of the NBA-SBL Mr. Ighodalo is the Founding and Managing Partner of Banwo & Ighodalo. He serves as a director to many notable establishments, some of which include Dangote Flour Mills PLC, AiQ Capital Management Limited, Zacchi & Krome Limited and Kakawa Discount House Limited.

Apart from being a lawyer, he also has a background in Economics. He is highly innovative and proactive and possesses an undisputed flair for brokering and assuring the smooth conclusion of the most complicated negotiations. He has been Chairman of The Board at Sterling Bank plc since July 2014.

An accomplished legal practitioner with an LL.B from the London School of Economics and Political Science in 1984 and a B.L from the Nigerian Law School, Lagos in 1985, Mr. Ighodalo’s core areas of practice include Corporate Finance, Capital Markets, Energy; Natural Resources, Mergers; Acquisitions, Banking; Securitization and Project Finance.

Asue Ighodalo who was part and parcel of the past executive, was in fact the engine that powered that administration. The Ighdalo led Exco is expected to surpass the achievements of the past administration if given desired support.

Mr. Aigboje Aig-Imoukhuede, the Vice President of the National Council of the Nigerian Stock Exchange (NSE), becomes the chairman of the exchange. He as been described from several quarters as the man with the magic wand. With almost 3 decades of banking under his belt, the transformation story of Access Bank Plc, as one of the top five banks in the country, serves as testimony. The Access story has been listed as a case study for MBA students in leading Business Schools across the world.

Aig, an alumnus of the Harvard Business School and law graduate of the University of Benin has been commended for his works and contributions to nation building and social transformational initiatives. He currently serves as Chairman of Friends Africa, just as he has led other African corporate organisations to donate $1 million to the Global Fund “Gift from Africa” project as a demonstration of the commitment of Africans to address some of the problems facing the continent, especially Tuberculosis and Malaria.

Aig-Imoukhuede started his career in the legal department of Continental Merchant Bank. Learning quickly that he enjoyed making deals than doing legal works, he transited to core banking.

Observers believe that his rounded exposure in his banking career, which spanned treasury, finance control and planning, commercial banking and investment banking, has proven beneficial to the development of the Nigerian economy and its financial service sectors. They said the experience he had garnered from these specialist fields of financial services have condensed to differentiate him from other leading bankers in his generation.

According to his associates, Aig-Imoukhuede’s exemplary business leadership styles have been influential in the admiration and respect given to other African professionals in the international business community.

Aig-Imoukhuede is known for his uncanny ability to bring dreams alive and his prowess as an outstanding manager of resources, has earned him a pride of place in the chronicle of successful corporate restructuring in the world.

The collective mood may have stemmed from his excellent pedigree and accomplishment, coupled with his knack for extraordinary business inclinations and his “special capacity to inspire others to greatness.”