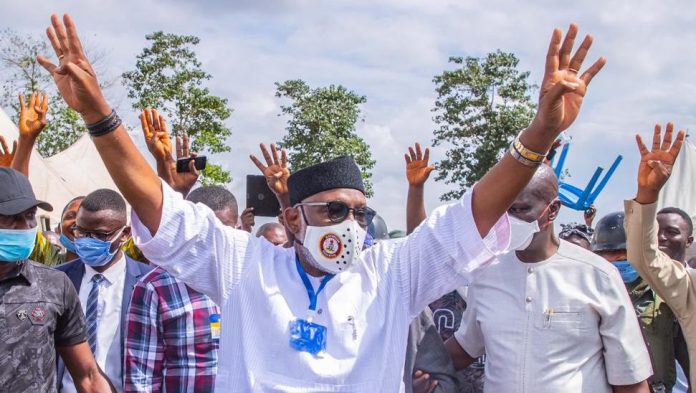 The Ondo State Election Petition Tribunal on Tuesday ruled out the petition filed by the candidate of the Peoples Democratic Party in the October 20, 2020 governorship election, Mr. Eyitayo Jegede, against the victory of Governor Rotimi Akeredolu.

Jegede had asked the tribunal for the nullification of Akeredolu as the winner of the election on the grounds of anomalies and invalid nomination of the candidate of the All Progressives Congress for the election.

The Independent National Electoral Commission announced Akeredolu the winner of the election after having the highest valid votes cast in the election.
The three-man panel led by Justice Umar Abubakar delivered the verdict via zoom as the regular venue of the panel was not open due to the strike action embarked upon by members of the Judicial Staff Union of Nigeria.

The tribunal waved all the grounds of the PDP candidate’s petition for lack of merits.

One of the grounds of the petition which was based on the issue of nomination of Akeredolu as the candidate of the APC was also ruled out as the court said the matter raised in the petition was an issue of internal affairs and management of a political party which the tribunal has no jurisdiction on.

The tribunal held that Akeredolu and his deputy, Aiyedatiwa,  were duly nominated and sponsored by the APC in line with Section 177 of the Constitution and Section 31 of the Electoral Act.

It ruled, “The tribunal cannot determine whether Mai Bala Buni, the Governor of Yobe State is illegally occupying the seat of caretaker chairman of the planning committee of the extraordinary convention of the APC.

“There is also evidence to confirm that the APC as the sponsor complied with the law in the process for the submission of the names of its candidates, Akeredolu and Aiyedatiwa. Jegede’s case is flawed and hereby dismissed.”

In his reaction, Akeredolu said the victory was for the people of the state, calling on his opponent to join hands with him to work for the state.

He said, “I must use this opportunity to thank the people of this state for the confidence they have in us. The people have spoken and they cannot be wrong. The result is there for all of us to see. It is a victory for all time and it has never happened in this state before, but we thank God for this victory. We thank God for the judgment of the tribunal.

“It was not just a victory, it was a double victory. We had people who went to court, about seven political parties against us at the Federal High Court, the case too was dismissed. There is no other thing, all I can say to you is that it is not me, it is not us; it is God, I give God all the glory. To God be the glory.”