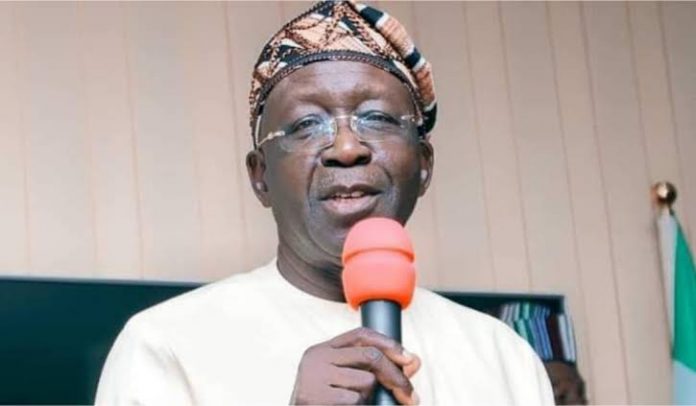 As the search for peace in the Peoples Democratic Party (PDP) continues, the National Chairman of the party, Dr. Iyorchia Ayu, has now given a condition for his resignation if the stakeholders are adamant on his exit.

He says all members of the National Working Committee (NWC) from the South must swap their current positions with those from the North since the PDP Presidential Candidate, Alhaji Atiku Abubakar is from the North.

However, Ayu’s proposal has been rejected by many party leaders who fear that their candidates in the NWC will lose their positions and influence.

One of those who stand to lose out if Ayu’s proposal on swapping of positions is accepted is Rivers State Governor Nyesom Wike.

His ally, Senator Samuel Anyawu from the South East zone, is the PDP National Secretary and head of the party’s national secretariat.

It was gathered that some party leaders have started making a u-turn to prevail on Wike and some governors to allow Ayu remain in office till after the 2023 presidential election.

The party, sources said last night, has also been gripped by fresh tension over alleged plan by some leaders to appoint Sokoto State Governor Aminu Waziri Tambuwal as the Director-General of the PDP Presidential Campaign Organisation.

Tambuwal stepped down for Atiku during the party’s presidential primary and he is being tipped for the office of Senate President if Atiku wins.

Party sources are of the view that appointing Tambuwal, a northerner, as the campaign organisation’s DG at a time some southerners are already complaining about the north’s annexation of the party’s chairmanship, BoT chairmanship, presidential candidate and positions of chief spokespersons for team would not be in the PDP’s best interest.

Although some leaders suggested Oyo State Governor Seyi Makinde as DG, there were concerns that combining his own campaign for a second term with that of running the presidential campaign team would be too much of a burden.

Some chieftains of PDP were said to be in favour of Wike as the Presidential Campaign Council DG to “heal wounds” in the party.

Investigation revealed that the crisis of confidence between Atiku and Wike, the fate of Ayu and other NWC officers, the choice of DG, the need for ethno-religious balance in PDP are responsible for the delay in composing the PDP Campaign Council.

It was also learnt that these issues influenced the Board of Trustees decision to prevail on Atiku and Wike to close ranks on Wednesday and Thursday in Abuja.

At the session with the Board of Trustees on Wednesday, Ayu said he was ready to sacrifice anything for the success of the party in the 2023 elections.

A member of the BOT, who spoke in confidence, said: “He told us that he was ready to step aside but he should not be isolated.

“He said since the presidential candidate is from the North, the ideal thing is for Northern officers in the NWC to swap positions with their Southern members to guarantee equity, fairness and justice.

“In spite of the fact that Ayu’s agitation is politically plausible, it may disrupt PDP’s zoning formula.

“This is why some of our leaders are saying that Ayu can only leave office when Atiku is elected as President.

“Some of us think Ayu should remain in office till after the elections.

“There are concerns that Ayu might not quit his position if Atiku loses the presidential race. This is also a probability.

“We don’t want any fresh crisis in the party. If there is a reversal of roles in NWC, some of our leaders, including Wike, will lose out.

“The governor of Rivers State singlehandedly produced the National Secretary of the party and a few others. It means Wike will further be in the cold in the power equation in PDP.”

Another BOT member said: “We did not want any further split in the party over Ayu because it was obvious to us that PDP will never be the same again if he is removed.

“What we agreed upon was to allow Ayu to remain in office till after the elections.

“Some BOT members said we should tactically pass a vote of confidence on Ayu, which we did when some of our leaders addressed the press.

“We count on Atiku and Wike to salvage the fragile situation in the party because they hold the aces.”

It was learnt that Atiku and Wike agreed to nominate separate teams to meet and iron out their differences.

It was also learnt that the main planks of their talks were inclusion, equity, fairness and justice for all, especially the South.

But while Atiku asked Wike to submit his list on the spot, the governor demurred.

Another source added: “Wike told Atiku that he will want to consult his strategists before unveiling his nominees for peace and reconciliation talks.

“Wike is still consulting with his strategists on the way forward for the party.”

Party chieftains are worried that plan to make Governor Tambuwal the Director-General of PDP Presidential Campaign Council may backfire.

Some party stalwarts prefer Seyi Makinde or Wike to “heal wounds” in the party.

Those opposed to Wike cited what they called the party’s experience with him during the 2019 presidential campaign.

A source said: “We have a feeling that Atiku is over indulging Tambuwal when it is obvious that votes from Sokoto State cannot make him President of Nigeria. The same man is aspiring to be the President of the Senate in 2023.

“Some leaders have asked Atiku to look at Makinde or Wike or any second term governor from Wike’s camp. We think that Makinde, who is a first term governor, cannot cope with the rigours of two campaigns in 2023. We may end up losing Oyo State.”

Another source, who was a member of the campaign committee, said: “Contrary to what Wike was saying, there was more to his involvement in financing the party’s campaign in 2019. I am shocked our leaders are keeping quiet.

“It was true that he assisted financially during the campaign through a former President of the Senate. But instead of allowing PDP National Secretariat to handle his assistance, Wike insisted on nominating a barrister to oversee the disbursement of funds.

“The National Financial Secretary and Treasurer never had access to what he gave. There was no direct cash given to the party or Atiku for the 2019 polls.

“Our former National Chairman, Prince Uche Secondus, is alive. He should speak out on his experience. Wike is a smart and intelligent politician who knows how to cut party officers to size, especially when funds are involved.”

The Thursday meeting was the first between Atiku and Wike since the PDP presidential candidate overlooked the Rivers Governor in his choice of running mate in favour of Delta State Governor Ifeanyi Okowa.

Atiku said his decision was informed by the realization that he needed a deputy he could work with amicably.