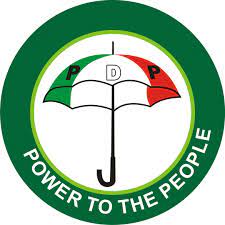 According to the section, the deputy national chairman (South) is empowered to act as national chairman in the chairman’s absence because the chairman is from the South zone.But Deputy National Chairman (North), Senator Sulaiman Nazif, objected, saying he is the acting chairman because “Akinwonmi is incapacitated”.Nazif, after presiding over an NWC meeting, announced the summoning of a National Executive Committee meeting for next week.

However, Legal Adviser Emmanuel Enoidem, also a member of NWC, said any meeting summoned must be backed by two-thirds members of the NWC. After Nazif’s pronouncement, Akinwonmi came into the secretariat at about 5pm. He said he is fit enough to lead the party and he had come to take over “in an acting capacity”.Akinwonmi was accompanied to the secretariat by a PDP stalwart in Ogun State and former member of the House of Representatives Ladi Adebutu. The National Secretary, Senator Umar Tsauri, also joined Akinwonmi at the news conference he addressed.

Despite his health challenge, Akinwonmi who spoke ex-tempore, was articulate as he recalled events and answered reporters’ questions coherently.Akinwonmi said: “I am here today to take up the leadership of the party. It is not my wish to be Acting Chairman. I did not plan to be chairman. As a matter of fact, I will not contest for any party position again.“I am not incapacitated. Earlier in the year, I had a stroke attack in my car on the way to my office at the party secretariat. I was admitted at the Cedarcrest Hospital in Abuja for three months. But I am getting over it.“My recovery rate is about 70 per cent. It’s true that I am sick but I am getting over it. I have been walking some distance to my car at different places from time to time”.Akinwonmi clarified that Nazif only stood in for him at the NWC meeting, adding that Nazif acted as Acting Chairman because he (Akinwonmi) did not arrive for the meeting on time.

He added that Nazif’s role as Acting National Chairman ended after yesterday’s NWC meeting, stressing that he had assumed the leadership role.Confirming the Friday date for the party’s National Executive Committee (NEC) as earlier announced by Nazif as valid, Akinwonmi said the decision was taken at the last NWC meeting, held last week and presided over by the chairman, Secondus, before his suspension.

Nazif said: “In the absence of the deputy chairman (South), I take full charge. So, I am hereby calling for an emergency NEC meeting on the 27th August, 2021, 10 am prompt to deliberate on matters affecting the party.“And I believe all the leaders of this party, the owners of this party, that will be in attendance are our governors, former presiding officers will be part of the NEC meeting to deliberate all pending issues”.Nazif overruled Akinwonmi’s decision to postpone NWC meeting indefinitely, maintaining that he is not the acting chairman.“The Deputy National Chairman (South) has been incapacitated and did not attend any meeting in the last nine to 10 months as far as NWC is concern.“He (Akinwonmi) has not been in communication with any member of the NWC for the last 10 months. And like I said, this party must continue its process.“And if I am not available, someone else will take over. If the national chairman is not available, someone will take over. If the deputy national chairman south is not available, the deputy chairman north will take charge.

“This is the resolution that was passed by the expanded caucus. And this was the resolution passed by the NWC in our last meeting and we all agreed that there will be a meeting today.Party’s Legal Adviser Enoidem said:”By Section 29 (3) of the constitution of our party, it is the national chairman or a summon backed by 2/3 members of the NWC that can validly convene a meeting of the NWC.“Sub-section (4) provides for 2/3 members of NWC to form a quorum for a meeting of the NWC.“As a bona fide member of the NWC, to the best of my knowledge, I am not aware of any meeting of NWC summoned by the national chairman or in the manner provided aforesaid.“It is therefore, of grave concern, and indeed, very sad to read the position purportedly taken by some distinguished members of NWC in utter disdain and violation of clear extant provisions of our constitution.“The issue of resignation of any officer of our party at any level is a personal decision as stipulated in Sections 45(1) & 47 (5).“There is no provision of our constitution which donates powers to any organ, individuals or group of persons to ask an officer of the party to resign for any reason whatsoever as was purported in the so called press release.

“The powers to remove any member of the NWC and indeed any national officer is reserved in the national convention which is due for December 2021.“The purported meeting was said to have been convened on Sunday August 8, 2021 against the widely published position taken by the BOT advising members and leaders of our party to maintain peace until a committee set up has deliberated on the raging controversies.”