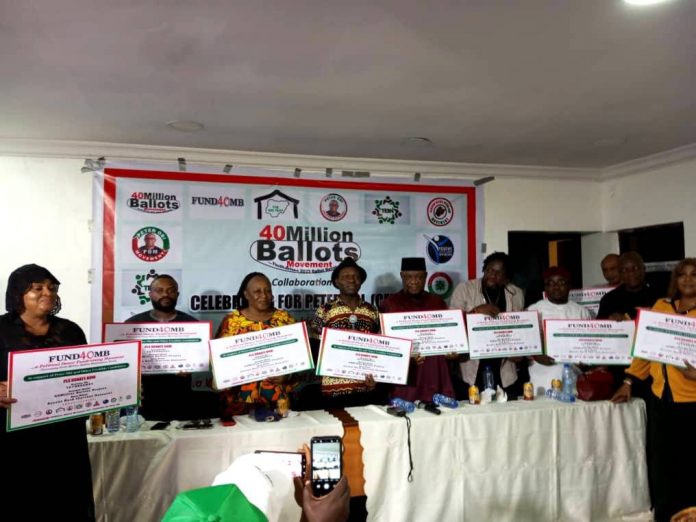 The FUND40MB Donation Campaign was officially flagged off yesterday in Lagos State, as a global political donor fundraising movement aimed to help create and build the “War chest” or operational funds needed by the major support groups of Peter and also for other credible candidates across party lines vying to be elected as Governors or Lawmakers in the 2023 general elections, as well as to generate sufficient funds which will be deployed to enable various NGOs and CSOs working to address the existing and potential threats of voter apathy, violence, rights violation and vote-rigging.

Comrade Kennedy Iyere, who is a frontline humanitarian activist and a high-profile social entrepreneur, is the Initiator and Chief Fundraiser of the FUND40MB Donation Campaign.

He said the campaign is being championed globally in collaboration with another pro-Obi support group driven by top Nigerian superstars, known as Celebrities For Peter Obi, CEPO, convened and headed by Patience Ozokwor, popularly known as “MAMA G”.

Speaking on the fundraising, Iyere, noted that it was to sustain the momentum and mobilise campaigns in support of Obi in the forthcoming general elections.

According to him, the FUND40MB donation campaign is a global political donor fundraising movement aimed to help create and build the “War chest” or operational funds needed by the major support groups of Peter and other credible candidates across party lines vying to be elected as Governors or Lawmakers in the 2023 general elections, as well as to generate sufficient funds which will be deployed to enable various NGOs and CSOs working to address the existing and potential threats of voter apathy, violence and vote-rigging.

Iyere also reiterated that apart from the above-outlined Peter Obi Support Groups, several NGOs, CSOs, FBOs, Cooperative Groups and other Social Networks shall likewise benefit from the FUND40MB Donation Campaign saying all the support groups would derive a share of the funds generated, in order to enable them to address certain existing threats that may hinder the credibility of the electoral processes and outcomes, particularly the risks of human rights violation, electoral violence and vote-rigging among others.

“This fundraising drive will be taken from door to door, neighbourhood to neighbourhood, city to city, coast to coast and country to country, until we hit our target or goal, which is to ensure that sufficient funds are fundraised, generated and mobilized for the support groups of Peter Obi and other credible guber and parliamentary candidates across party lines, as well as for NGOs, CSOs, FBOs and other related groups pragmatically working for Nigeria’s peaceful and credible democratic transition in 2023”, Iyere declared.

“We do not want money to be an issue. The determination is in young people to take back their country and rescue Nigeria from the edge of the precipice”, Iyere quoted.

“This is what FUND40MB Donation Campaign is all about. An account has been created for the donation campaign designed to raise money worldwide for the various support groups of Peter Obi, so as to carry out rural sensitisation, door-to-door campaigns and other programmes”, Iyere said.

“This fundraising campaign is independent of Peter Obi and the Labour Party. We are financing every interest group that will work for democracy and a democratic transition in favour of Peter Obi and other guber and parliamentary candidates across party lines”, he quoted.

“The funds we also going to raise through this medium shall be used to fight rigging, violence and all forms of malpractices. That is why the FUND40MB Donation Campaign has been kicked started today.”, he reaffirmed.

He said that the fundraising was to confront politicians who might want to use money as strength, to fight the will of God’s purpose.which will not work.

According to him, the step has become imperative for the survival of the nation as the youth are now risen from their sleep to take back their nation in 2023.

He said that political elites had weaponised poverty to remain relevant and perpetuate their continuous stay in power.

“When youths have risen up, anything is possible. The youth are ready to take back their nation. The time for Nigeria’s political redemption is now”, says Iyere

“Nigeria has just one upward option, and that is the youth revolution. Peter Obi is no longer for himself, he has become a global phenomenon”, he affirmed.

“2023 is going to be a very peculiar election with two players; Masses against the Elites and the masses must win the game.

‘Nigerians and non-Nigerians would contribute to the funding of Obi campaigns, saying the former Anambra governor deserved assistance for his campaign to be the most celebrated”, he said.

One of the Celebrities in attendance, Patience Ozokwor, a Nollywood Actress, declared that the FUND40MB Donation Campaign will generate sufficient funds to support the “Obedient Movement” in the efforts to enforce the victory of Peter Obi in 2023.

Ozokwor, popularly known as MAMA G, appealed to Nigerians and global donors to make sacrificial and generous donations to the account.

“For the sake of our children’s future and posterity, please donate to assist this cause, Peter Obi must be elected Nigeria’s president in 2023, else the country may go into extinction”, Ozokwor said.

This is the time to bring sane people into the political life of Nigeria, said that if Nigeria had got leadership right, her material resources and endowment would have made the country stand out among the comity of nations.

The popularly known Mama G said that celebrities were solidly behind Obi to provide the right leadership for the nation, adding that any donation for his campaign remained an investment Nigerian children and unborn children would later reap.

Her words: “We want anybody that loves Nigeria and wants everything good for Nigeria to please donate no matter how small. Children, youths and God want Obi.

“We have seen that Obi as a former governor is prudent with the public fund and use same judiciously. He has credibility. We want him to come and change things and mend things.”

The President, of the Actors Guild of Nigeria (AGN), Ejezie Rollas, who spoke in his personal capacity and not for the AGN, said that many celebrities had stood aloof for long and been unconcerned about politics, saying these had led to many challenges facing the industry and complaints by practitioners.

Rollas, who threw his weight behind Obi’s presidential ambition, said that celebrities must be interested in making the nation work well for all and sundry.

Klint De Drunk urged Nigerians to support the initiative and donate to the cause of bringing back Nigeria from the hands of the dictators.

“All we are asking is that you give your widow’s mite so that we can all enjoy it again after the election in 2023.

“If we do the right thing now, our generation and generation after us and the ones yet unborn will benefit from our sacrifices”, he said.

Bishop Ime, also in his reaction reiterated the need for Nigerians to do the right thing by voting for Peter Obi saying failure to do so will take the country backwards.

Former Chairman of ICAN, Emmanuel Ijewere who was the Special Guest of Honour at the high-profile event, gave heart-warming goodwill remarks. Dr T.J Eherim also visited from Johannesburg South Africa and was also a Special Guest.

According to them, “Among the Presidential Candidates vying for election in 2023, Peter Obi remains the best and only option for Nigeria”.