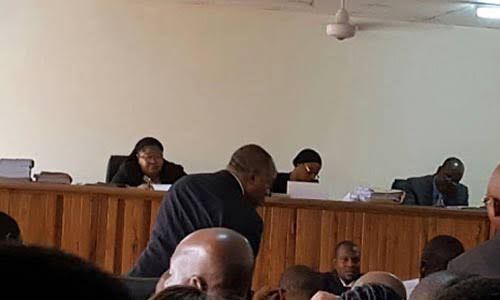 witness, Isiaka Olanrewaju, on Monday told the Osun State Election Petitions Tribunal that there were irregularities in the election results which declared Ademola Adeleke, as the governor-elect

The Independent National Electoral Commission (INEC) had on July 16 declared Mr Adeleke as the winner, having polled 403,271 votes against 375,027 polled by Governor Gboyega Oyetola of Osun.

Consequently, Mr Oyetola and the APC, on August 5, submitted a petition before the tribunal in Osogbo.

Mr Oyetola and the APC are challenging the election results from 749 polling units across 10 local government areas of the state for various alleged electoral malpractice, especially over-voting.

At the resumed hearing on Monday Mr Olanrewaju, the first witness for Mr Oyetola told the tribunal that he came to the conclusion of the irregularities after analysing the result forms for the election and comparing them with the Bimodal Voters Accreditation System (BVAS).

Led in evidence by the petitioners’ counsel, Akin Olujinmi (SAN), the witness said he relied on forms EC8As, EC8B, EC8C, EC8D, EC8E and BVAS reports released by INEC to arrive at his findings.

While being cross-examined by INEC counsel, Professor Paul Ananaba, the witness said he analysed the results of the election in 749 units across 10 local governments.

While Mr Ananaba put it to Olanrewaju that he analysed results of 762 units, the witness responded that the figure was not his opinion.

The witness was also cross-examined by Counsel to Adeleke, Onyechi Ikpeazu (SAN), and Counsel for the PDP, Alex Izinyon (SAN).

Mr Olarenwaju told the tribunal that though he did not operate the BVAS machine on the election day, he received the Certified True Copy (CTC) of the BVAS report on July 27  after the election.

The witness further testified that he was an expert, who had operated several electronic devices, including BVAS before and could determine whenever the machine was tampered with.

On whether his analysis was done only where the PDP won, the witness said, “I did my analysis across 749 polling units in 10 local governments, regardless of which party won.”

Earlier, the tribunal granted an application by Mr Oyetola’s Counsel to amend the list of witnesses filed before the panel by including the acronym used to represent their names.

Mr Olujinmi had also informed the tribunal that the INEC Counsel had filed an application to stop the Subpoena issued by the tribunal on INEC to bring Adeleke’s certificate and other documents he used in the 2018 Governorship Election.

He said that the evidence of his next witness would be based on the documents being requested for.

Mr Olujinmi said he would wait in calling the second witness until the tribunal decides on the application of INEC Counsel.

The Chairman of the panel, Terse Kume, adjourned further hearing until tomorrow.