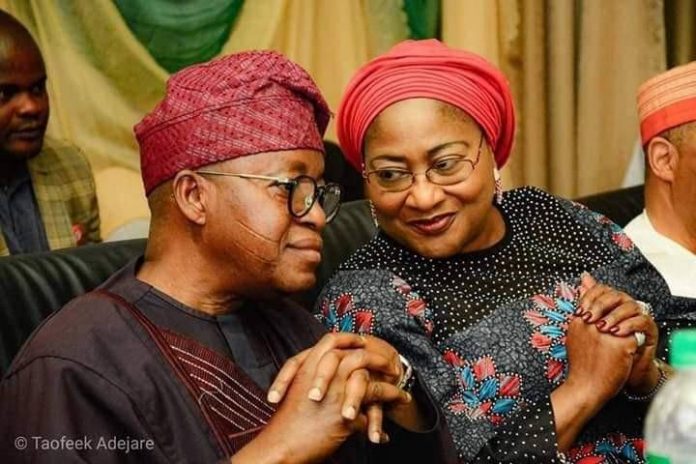 The wife of the former governor of Osun State, Gboyega Oyetola, Kafayat has reacted to reports that she went away with cars belonging to the government.

This followed the expiration of her husband’s tenure as governor.

The Peoples Democratic Party (PDP) had earlier claimed that the Governor, his wife, deputy and some of his aides took away 11 vehicles they used as official vehicles.

However, Oyetola’s spokesperson, Rotimi Ajayi, explained his principal’s position on the matter.

Ajayi told Premium Times that the official vehicle the former first lady used during her husband’s administration was a Toyota Land Cruiser which according to him does not belong to the state.

He said, “The vehicle in the possession of the wife of the former governor, the official vehicle, first of all, did not belong to the state. She was using her car throughout. I am sure they do not have their bearing in their papers correct.”

Ajayi insisted Oyetola used her personal vehicle during her four years in power.

“There is nowhere the wife of the former governor took away any vehicle from here. Perhaps, we might need to throw some light on how they even left Osun. They flew from Ibadan to Lagos and the escort that took her from Osogbo to Ibadan returned to Osogbo.

“Apart from her private vehicle that I told you, that is the Toyota Cruiser, no other vehicle,” he added.

Ajayi also said that Oyetola bought some vehicles which were used for campaigning during her husband’s failed reelection bid, stressing that “the vehicles were private.”

He said, “Of course, we have some buses that we bought which were private that we were using for the election. So that allegation is totally false, it was brought up by some mischievous elements who did not understand how government works and people who were not even prepared for governing and could not even go as much as find out information or details about which vehicles were allocated. That information is totally false.”

However, the All Progressives Congress (APC) in the state has acknowledged that Governor Oyetola, his deputy and former commissioners left with their official vehicles but said they were entitled to do so.