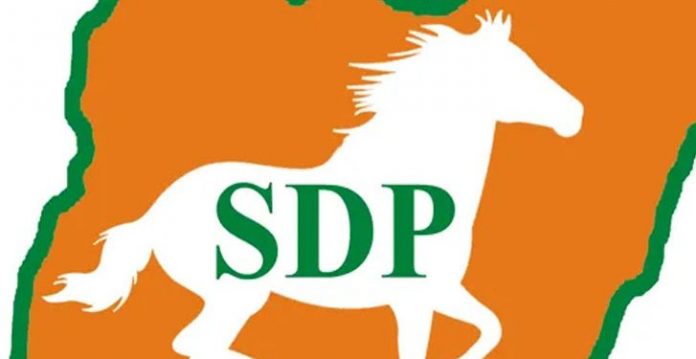 On Thursday, there was chaos in the Osun state branch of the Social Democratic Party, SDP, when Elder Femi Awe, who had imposed himself as the party’s Acting Chairman, was whisked away by the police during a program arranged for the party.

The prayer session was conducted in Osogbo’s Ajegunle neighborhood, directly across from the Dugbe Police Station.
Around 11:30 a.m., Christian and Muslim clerics led prayers for Nigeria, Osun State, and the group.

Elder Awe has been kicked out of the group since 2018 as revealed to Newswire.

According to reports, after a traditionalist offered prayers, Elder Awe was confronted by some police officers dressed in mufti, who accused him of organizing such a program in public without telling security personnel.

The officers insisted that the Commissioner of Police had directed them to bring him to the Osun State Police Command for interrogation.

Azeez Musbau, claiming to be the party’s secretary in Osun, said, “On April 14, 2021, we told the Police, Department of State Service (DSS), and Nigeria Security and Civil Defence Corps about the initiative.”

“All the security agencies certified they received the copy, but we are surprised that the police came into the programme today and took away the chairman of the party, even though we presented the copies of a letter that they received our notification.”

Confirming the arrest of Awe, the Osun State police spokesperson, SP Yemisi Opalola said Oladehinde petitioned the police over the meeting being organised by someone imposing himself as the acting chairman of the party.

She added that the police acted upon the call as the police invited the duo.

“We didn’t arrest him but invited him.”

He said, “the only chairman in Osun SDP is Dr Sola Oladehinde which I am his deputy. Elder Awe had been expelled from the party before Osun 2018 gubernatorial election. He is not a member of our party.

“The Secretary in Osun is Akeem Bello, not Azeez Musbau, who is pretending to be the Secretary.
Those are pretenders that have been kicked out of the crowd.
The INEC has a list of the state’s executives.”

When contacted by the party’s National Chairman, Dr Olu Agunloye, he confirmed that Oladehinde is the chairman of the party in Osun and that Awe is not a member of the party.

“The chairman is Sola Oladehinde.
For me, there is no evidence that one Femi Awe is a member of the group.
It’s a strange development; I’ve never seen anything like it.
“When anyone would simply wake up and pretend to be the acting chairman of a part,” the national chairman said.