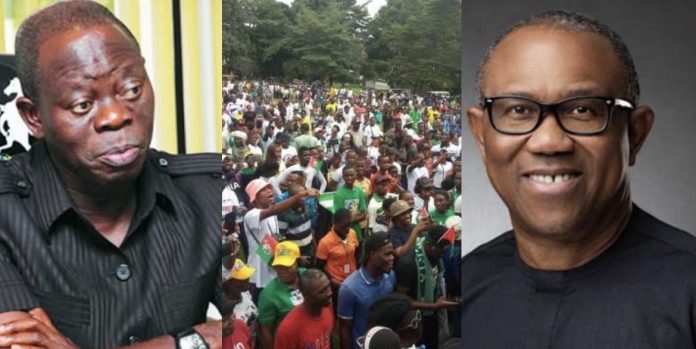 Mr Oshiomhole, the All Progressives Congress senatorial candidate for Edo North, said this at the flag off of his campaign on Friday in Auchi.

“Obi owns the biggest shopping mall in Abuja and all the items sold there are imported, so if he is selling imported wines, clothes and other items, he is contributing to why Nigeria is going down because he is creating jobs abroad and importing unemployment to Nigeria” Mr Oshiomhole said.

As of the last quarter of 2020, Nigeria’s unemployment rate stood at an all-time high of 33. per cent, with the ruling All Progressives Congress blamed for the economic malaise. Not much has been done to better the situation since then, with inflation and cash crunch biting harder on the populace.

Mr Obi, a former bank chief and a serial businessman, said he built his wealth importing choice beverages, among other consumables.

Most Nigerians depend on imported goods ranging from premium motor spirit to as minute as toothpicks, as the hostile business environment continues to favour importation ahead of local production.

Since emerging as the Labour Party flag bearer, Mr Obi, a former Anambra governor, has planked his campaign on moving the country from consumption to production, if elected in the 2023 polls.

Meanwhile, Mr Obi visited Auchi, Mr Oshiomhole’s political base on Friday to confer with the traditional ruler Aliru Momoh, the Otaru of Auchi.

The cameo visit drew out a mammoth crowd of Mr Obi’s supporters, taking a shine of Mr Oshiomhole’s event holding at about the same time.

Mr Obi had been campaigning in Edo State since Thursday with hordes of ‘Obidients’ (his diehard supporters) thronging Benin, the state capital in large processions and motorcades. The march caused significant gridlock around the city.