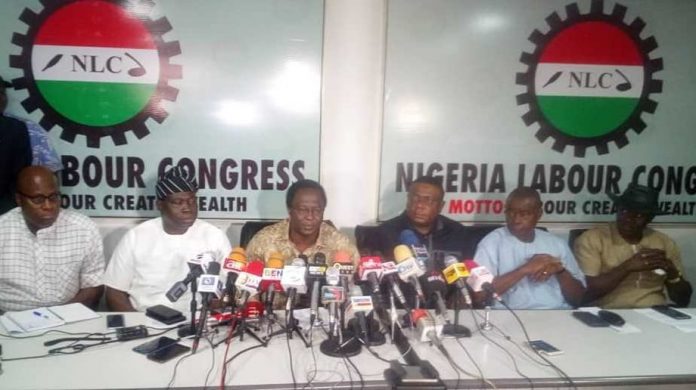 The Organised Labour has warned the Federal Government to be ready for another battle over its fresh move to increase petrol pump price by over 200 per cent. The union has placed workers under its platform on what it called “red alert”.

The Organised Labour in a letter to President Muhammadu Buhari has told the presidency to be ready for another battle with Nigerians if he failes to arrest moves by functionaries in his administration to create “avoidable” labour and political crisis in the country.The labour movement, while placing the workers under its platform on what it called “red alert”, also accused the presidency of trying to impose a new regime of fuel price hike on the country, thereby, subjecting Nigerians to severe hardship.

To make clear its position on the proposed fuel hike, the Nigeria Labour Congress (NLC) recently summoned its three organs, the National Administrative Council (NAC), the Central Working Committee (CWC) and the National Executive Council (NEC), to an emergency meeting early December.This, according to the labour centre, is to plan the next line of action in the event that the Federal Government goes ahead with its proposal.

Letters to that effect have been sent out and the meeting, among others, would give directive to the workers on the position of labour whenever government carries out its plan.The Group Managing Director and Chief Executive Officer of the Nigeria National Petroleum Corporation (NNPC), Malam Mele Kyari, announced that the price of petrol could rise to between N320 and N340 from February, 2022.

He said the price increase would be consequent on the plans by the Federal Government to remove subsidy on Premium Motor Spirit also commonly referred to as petrol or fuel.

Reacting, the NLC warned the Federal Government that the over 200 percent proposed hike on price of petroleum would further aggravate insecurity and possibly lead to citizens’ revolt.

The NLC President, Ayuba Wabba, on the statements credited to Kyari and the Minister of Finance, Budget and National Planning, Mrs. Zainab Ahmed, noted that the contemplation by government to increase the price of petrol by more than 200 per cent was a perfect recipe for an aggravated pile of hyper-inflation and astronomical increase in the prices of goods and services.

“This will open a wide door to unintended social consequences such as degeneration of the current insecurity crises and possibly citizens’ revolt. This is not an outcome that any sane Nigeria wishes for,” he said.

He reasoned that the argument that the complete surrender of the price of petrol to market forces would normalise the curve of demand and supply as being wrongly attributed to the current market realities with cooking gas, diesel and kerosene was very obtuse.

“The truth is that these commodities which Nigeria can easily produce have been priced out of the reach of most Nigerian families with majority of our people resorting to tree felling and charcoal for their energy needs,” he stated.

Wabba said the grand optimism of Kyari was predicated on the claims that the removal of fuel subsidy was now backed by an act of parliament, the Petroleum Industry Act, recently signed into law.

He said the assertion of Kyari was re-echoed on November 23, 2021, by the Minister of Finance, Budget and National Planning, Mrs. Ahmed, at the launch of the World Bank Nigeria Development Update (NDU), entitled “Time for Business Unusual”, where she announced government’s plan to disburse N5,000 to 40 million poorest Nigerians each as transport grant to cushion the effect of the planned removal of fuel subsidy.

Wabba said the disclosures by the NNPC GMD and the Minister of Finance were in agreement with the positions of the World Bank Country Director for Nigeria, Mr. Shubham Chaudhuri and the International Monetary Fund, urging the Federal Government to do away with fuel subsidy.

Wabba reiterated Labour’s position that such deregulation based on import-driven model would impoverish Nigerians the more.

He warned that the bait by the government to pay 40 million Nigerians N5000 as palliative to cushion the effect of astronomical increase in the price of petrol was comical, to say the least.

“The total amount involved in this queer initiative is far more than the money government claims to spend currently on fuel subsidy.

“Apart from our concerns on the transparency of the disbursement given previous experiences with such schemes, we are wondering if government is not trying to rob Nigerians to pay Nigerians? Why pay me N5000 and then subject me to perpetual suffering?Clearly, government thoughts on the so-called removal of fuel subsidy is cloudy and appears to be a “penny wise-pound foolish” gamble.

” It is clear that the palliative offered by government will not cure the cancer that will befall the mass of our people who suffer the double jeopardy of hyper -inflation while their salaries remain fixed.

“As we had done several times, we call on the Federal Government to consider various options that can help Nigeria navigate out of the quagmire constructed by the failure of successive governments to embrace developmental governance and accountable leadership,” Wabba said.

He said some of the viable options that could help includeed: Insulate domestic consumers from the market pressure brought about by the free fall of the Naira by making arrangement with contiguous refineries not far from Nigeria to swap crude oil with refined petroleum products; accelerate work on the rehabilitation of Nigeria’s four major refineries which are all currently operating at near zero installed capacity; and establish empirical data on the quantity of refined petroleum products consumed daily by Nigerians.

He said: “It is unfortunate that this record remains a myth and a huge crater for all manner of official sleaze and leakages in the downstream petroleum sub-sector of Nigeria’s oil and gas industry. A stitch in time might saves nine.”

The Trade Union Congress of Nigeria (TUC), said the government’s new position on fuel subsidy was totally unacceptable and warned that the government was looking for trouble.

The TUC Secretary-General, Musa Lawal, said Labour was shocked with government’s pronouncement last week, calling it a unilateral decision without the input of Labour.

He said: “The Presidential Committee made up of government representatives and Labour has not concluded its assignment. Our last meeting was in April. This new position is totally unacceptable to us.

“Let us look at the issue of N5,000 for about 40 million Nigerians. How did the government arrive at the figure? How did they determine the targeted beneficiaries? Most Nigerians are aware that similar money was given out, the identities of the beneficiaries have remained a subject of controversy and debate among Nigerians.”

The National President of the National Union of Food Beverage and Tobacco Employees (NUFBTE),Comrade  Lateef Oyelekan, believed that a sensitive government in touch with what its people are going through would not contemplate such proposal.

He said: “The 30,000 Minimum Wage didn’t get anywhere, is it N5,000 that will now cushion people’s hardship? Cost of essential goods and services are already beyond the reach of the people.”

Vice Chairman, Association of Senior Civil Servant of Nigeria (ASCSN), Ogun State, Mr. James Oyesola, also warned that it would be catastrophic for the economy as it would lead to further inflation.

“Petrol, being the driver of the economy, it’s going to affect every area of our economy, the market women, artisans, manufacturers and the rest,” he said.

He saw as inconsequential the proposed payment of N5,000, adding that it cannot solve any of the problems being faced by Nigerians.

“What has that got to do with what is on the ground. How is N5,000 going to cushion the effect of the transportation problem. It cannot last them two days. Who is teaching them all this nonsense,” he queried angrily.