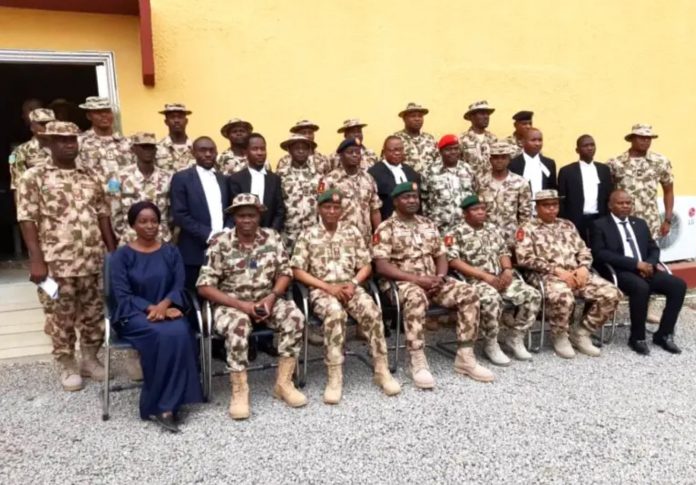 According to him, the President of the SCM is Brig-Gen. Hamza Gambo.

The alleged offences were committed during the counter-terrorism operations in Borno, Adamawa, Yobe and other states in the region.

Unveiling the commencement of court martial trials at the Maimalari Cantonment, Maiduguri, General Musa recalled that 3 Court Martials were inaugurated on the 9th October 2021, and the courts disposed about 227 cases. Out of which, 107 cases were recommended for summary trials while 120 cases have been concluded.

Besides, he added that 10 officers and soldiers were discharged and acquitted along with the struck off of 14 cases.

His words: “I wish to welcome you all to the Theatre CommandOfficers’ Mess, venue for the inauguration of Special Court Martial.

“You will recalled that 3 Court Martials were inaugurated on 9 Oct 21 and the courts disposed about 227 cases. Out of which, 107 cases were recommended for summary trials while 120 cases have been concluded.

“Some of the accused persons were convicted and awarded various punishments in accordance with provisions of the Armed Forces Act CAP A20 FN 04.

“Therefore, the court I am about to inaugurate today is to try the left over cases by the dissolved courts and some recent established cases involving personnel for professional misconduct.

“The Military as an institution is known for maintenance of discipline while discharging our constitutional duties. The operational efficacy of the troops is guaranteed when the value of discipline is upheld. This inform the decision to inaugurate this Special Court Martial under my command this morning to continue with the leftover cases in the Theatre in the spirit of Justice delayed is Justice denied.

“The inauguration of this court therefore is nothing but a normal command responsibility placed on me by Section 131 (2) (d) of the Armed Forces Act CAP A20 LFN 2004.

” Though the Court is Special but it does not have any special interest to serve rather than the maintenance of justice, discipline and regimentation.

“Therefore, the Court will be guided by the principles of natural justice, equity and fairness throughout the conduct of its proceedings.

“Let me assure you the accused persons that nobody has any reason to fear as the Court will carry out its proceedings in accordance with the provisions of extant rules and regulations.

“The Theatre command has already provided a level playing field for both the accused persons and the prosecution team.

“To this end, I wish to call on the President, members of the Court and all other stakeholders to remember your oaths, honor and dignity which requires you to justify the confidence reposed on you.

He however called on the Court Martial President to ensure justice for the 29 suspects and the court trying them.

The Theatre Legal Adviser, Squadron Leader, Audu Satomi in his remarks disclosed that the trials of the officers and soldiers will immediately commence with the inauguration of the court martial.