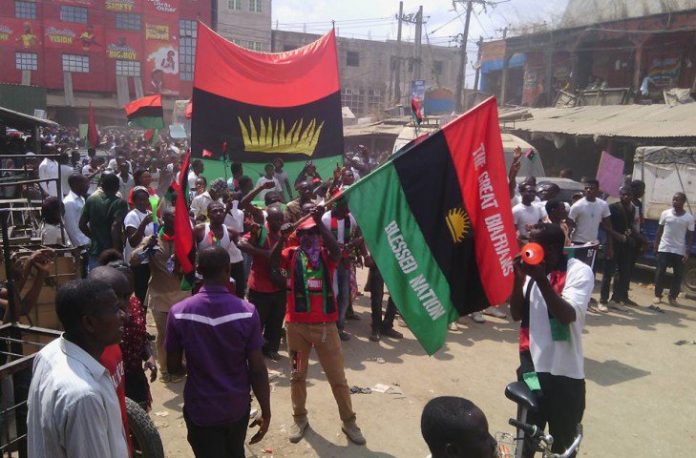 THE Indigenous People of Biafra, IPOB, led by Mazi Nnamdi Kanu, has commended the Eastern Security Network, ESN, for its defence of Biafra land in the last one year of its inauguration.The group warned against politicians and Department of State Security, DSS’ alleged plan to recruit 500 youths into the security outfit, saying that it was a plot to deceive Biafrans and make them believe they are in charge of ESN in Biafra land.

According to Media and Publicity Secretary of the group, Emma Powerful, who vowed ‘’not to allow saboteurs to create another ESN to confuse and bring harm to our people,” assured Biafrans that ESN leadership is firmly ‘’under the control of those our leader entrusted the responsibly into their hands.”He said: “We are the global movement and family of the Indigenous People of Biafra, IPOB, under the command and leadership of Mazi Nnamdi Kanu. We most sincerely commend the gallantry of the men of Eastern Security Network for resolute defence of our ancestral land in the last one year of its inauguration.

We commend them for staking their lives for the protection and security of our mothers, wives and sisters. Since they came on board, the murderous activities of Fulani jihadists masquerading as herdsmen have been put on check across Biafra land although there are still pockets of occasional attacks by these vampires.“Nevertheless, IPOB worldwide is very appreciative of the ESN operatives for their gallantry and avowed commitment in protecting our land. Bravo on your one year anniversary!

Our attention has also been drawn to the laughable and disgraceful claims and appeals from those who are being used to sabotage Biafra restoration efforts of our great leader Mazi Nnamdi Kanu and IPOB leadership. “It’s clear to all that our Leader Mazi Nnamdi Kanu inaugurated ESN on the 12th of December 2021 without these sabotures now claiming what they did not do. Regrettably, those who didn’t play any role in the formation of ESN, want to take credit for what they neither knew the process of its formation nor played any role thereof.

Today they are calling for launching of funds to create another ESN in Biafraland. We are calling on Biafrans both home and in the Diaspora to be very weary of and shun the planned fund raising event which is a ploy by those working for the zoo politicians and the DSS to purportedly recruit 5000 youths into ESN. This is another ploy to deceive our people, and make them believe they are in charge of ESN in Biafraland.”“IPOB/ESN structure is not two but one under one central command. Anybody making any claims to the contrary is an impostor and must be rejected as such. IPOB will not allow such people to continue defrauding Biafran people scattered all over the world,” the statement reads.