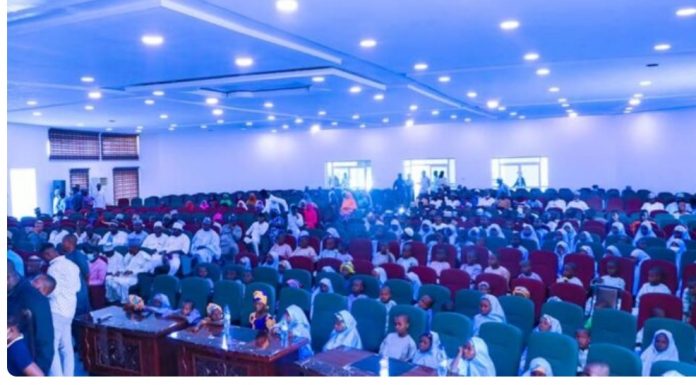 Abubakar Bello, governor of Niger, says one of the pupils abducted from Salihu Tanko School in Tegina, Rafi LGA of the state, died in captivity.

The pupils, who were kidnapped on May 30, regained their freedom on Thursday — they spent more than 16 weeks in captivity.Speaking at a media briefing on Friday at the government house when he received the children, Bello said 90 pupils were freed, adding that all except four of them have been cleared by medical personnel.“Late last night, moving into the early hours of this morning, we received the abducted Tegina Islamiyya school children that were kidnapped,” he said.

“You may recall that gunmen invaded Tegina town and abducted young boys and girls between the ages of three and 12. Since then, we have been on their trail, deploying every necessary means within our efforts to secure their release. I am happy to announce that finally, we have received them.“They arrived Minna in the early hours of this morning and since then, the medical officials have been attending to them to ensure their health status. In total, 91 children were kidnapped, and we have received 90. Unfortunately, we lost one of them. May his soul rest in peace.“Alongside the 91 children, there were two other abducted people who have been released as well.”

The governor, who condemned the attackers for targeting children, however, commended security agencies, Rafi LG executives, the headmaster, among other stakeholders, who worked towards ensuring the release of the children.“This goes to show the sickness and madness in the heads of some people. Otherwise, I cannot explain or imagine why you will abduct an innocent three-year-old, and keep him or her for over 80 days,” Bello said.“But without wasting time, I have just been informed by our medical team that all the children have been checked and all of them appear to be okay, but four of them. We will be releasing them to their parents and I’m sure their parents are eager to have their loved ones back home.“This has affected the morale, confidence in people and has made parents think twice before they send their children to school. However, I can assure you that we will do whatever it takes to bring them to justice. We have put all necessary measures in place to hunt down and prosecute those involved in this heinous act.”