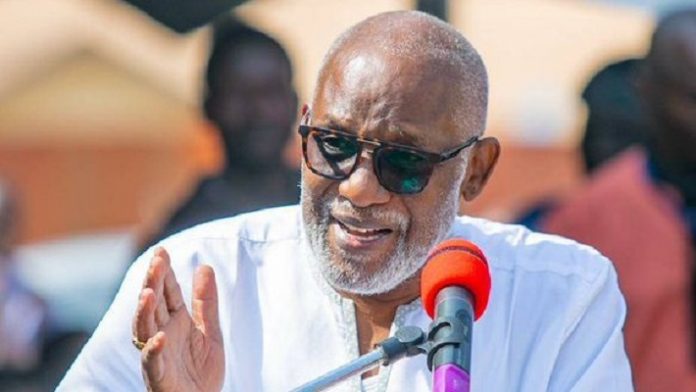 Governor Rotimi Akeredolu has given reason why his administration delayed the December 2022 salary of Ondo civil servants, despite their anticipation to celebrate the Christmas festivities.

Speaking on Tuesday, Mr Akeredolu said the civil servants’ salaries were placed on hold based on advice from the labour leaders to allow the workers to meet their “new year” financial obligations.

He said that he heeded the advice since many workers would want to pay the tuition of their children at the resumption of the 2023 academic session.

“As you are aware, you received three alerts in December. We paid for October and November 2022. You also received leave bonus. We would have paid in December but the Labour leaders advised that we delay it till January to allow you meet financial obligations. Students will resume soon. We will pay school fees,” Mr Akeredolu said at the governor’s office in Akure.

Speaking at the annual prayer meeting with civil servants on the first working day for the new year, the governor said that his administration has fulfilled its promise not to owe workers’ salaries.

He noted that the December salary would soon be paid, and vowed to offset the one month outstanding inherited from the seven months’ salary arrears left behind by former governor Olusegun Mimiko before the end of his tenure.

“Also, we inherited seven months’ salary arrears, we paid six. Before I leave office, I will pay the remaining one,” the governor said.

Mr Akeredolu assured that his administration would continue to give consideration to workers’ well-being, notwithstanding competing demands from other segments of the state.

According to him, in spite of the state’s lean resources, his administration will continue to do more and not shy away from its responsibility.

Mr Akeredolu also described as heartwarming, the workers’ testimonies on the new Duty Tour Allowance, training and retraining, provision of working tools and enabling environment for the service to thrive, among others.

The governor further assured of his administration’s resolve to improve the quality of lives of residents of the state, as well as deliver on his promises.

He said that without the commitment of the workers, his administration would not have recorded the modest feats achieved in its policy thrust.

Urging civil servants to shun partisan politics in next month’s election, he said that government workers needed to play by the rules while exercising their franchise at the elections.

“Let me reiterate for the umpteenth time that public servants are not expected to be involved in partisan politics. Absolute loyalty and commitment should be the watchword of the service.

“Again, political discourse should be civil with decorum and in a statutory manner. You will note that our administration has insulated the bureaucracy from partisan politics,” the governor added.