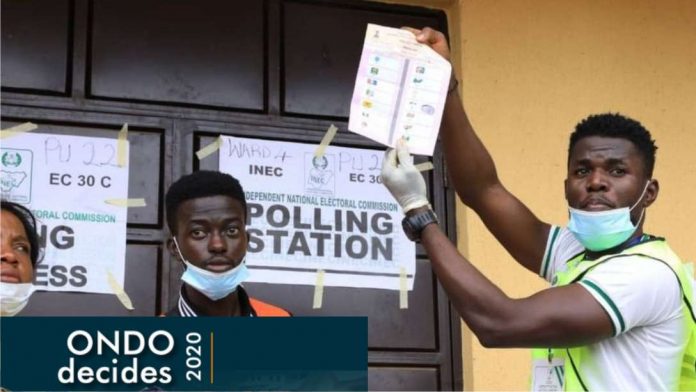 PREAMBLE
The Independent National Electoral Commission (“INEC”) conducted the Ondo State Gubernatorial elections on Saturday, 10 October 2020. The Nigerian Bar Association ‘NBA’ election working group played an active role in observing the electioneering process. The election results are being collated at the moment, and below is the interim report of the NBA EWG.

1. DEPLOYMENT OF OBSERVERS
The Independent National Electoral Commission (INEC) accredited the NBA Election Working Group (NBA-EWG) to observe the Ondo State Governorship Election 2020. In consonance with the said accreditation, the NBA-EWG was deployed to Ondo State on Thursday, 8 October, 2020. Members of the group included by the Chairmen of the five branches (Akure, Ondo, Okitipupa, Owo and Ikare-Akoko) of the Nigerian Bar Association in Ondo state. The NBA-EWG engaged the services of some members of the NBA in Ondo state to assist with necessary feedback during the election from their various polling units. This was to ensure that NBA-EWG had a better coverage of all local government areas. The NBA-EWG deployed its members to various Local Government Areas in the State Comprising of; Okitipupa, Irele, Ilaje, Ese-odo, Ondo East, Ondo West, Odigbo, Ile-Oluji/Oke-igbo, Owo, Ose, Akoko North East, Akoko South West, Akoko North West, Idanre, Ifedore, Akure South, Akure North.

2. PRE-ELECTION OBSERVATION
Some weeks prior to the election, there was tension and serial attacks by agents of political groups. However, a peace accord was signed by the political gladiators on Tuesday 6th October 2020 and further to that event, there was relative peace in the major cities, which persisted till Election Day. The Group also observed the heavy presence of Security officials in the state.

3. DEPLOYMENT OF ELECTION OFFICIALS AND MATERIAL FOR THE ELECTIONS:
From the over 500 Polling Units covered by the NBA Group, the arrival time of INEC officials was impressive and the INEC support staff were adequately deployed to their stations. Polls commenced between 8:30-9:00 am.
There were no complaints of shortage of voting materials and this was confirmed by the Presiding officers. We observe that this is a massive improvement from past elections.

4. COVID-19 COMPLIANCE
The overall impression of the group in the areas covered suggests that there was poor compliance with COVID-19 Protocol.
• Social distancing protocol was not complied with. There was no social distancing at all at the polling units, although very few voters wore their face masks.
• There was adequate provision of hand sanitizers and temperature test kits at the polling units.

5. VOTER TURNOUT
The turnout was low across various polling units visited by our team. However, voters were eager to cast their votes despite the envisaged fear and apprehension of violence. As early as 7:30 am, most voters were at the polling units to cast their votes.
In most cases, voters in some polling units organized themselves in an orderly manner after getting their serial numbers from the voters’ register and awaiting the commencement of voting for a seamless voting process. Generally there was voter apathy.

6. AGENTS OF POLITICAL PARTIES
The Group observed that there were political parties agents present in most of the polling units. The agents followed through with the process of commencement of accreditation, voting and collation of results. They checked to ensure that the ballot boxes were properly sealed. Party agents were generally satisfied with the election process.

7. VOTER DEMOGRAPHICS
Generally, the older people between age 40 and above participated more in the election. Female voters outnumbered the male in most polling units as observed by the team.

8. SMART CARD READERS:
The Card Readers worked significantly well. However, in few of the polling units observed by the team, the Card Readers could not authenticate the finger prints of some voters and they were not allowed to vote. We note that in some polling units, the card readers had network challenges in reading voters’ fingerprints but there was a technician on ground to resolve the issue.

9. SECURITY ISSUES
Our team observed a marked improvement in the conduct and disposition of the security agencies during the election. Most of them were courteous and did not interfere with the electoral process. Most polling units had the presence of the Nigerian Police, Civil Defense
Corps etc. The Nigerian Military and Mobile Police Force provided Security within the state as well as boundaries of Local Government Areas.

10. CONDUCT OF VOTERS
Despite the envisaged fear, anxiety and uncertainty occasioned by pre-election build-up, the people of Ondo State went out to the polling units to cast their votes. Most of the voters understood the electoral process and conducted themselves in an orderly manner and this accounted for the relative peaceful atmosphere that was witnessed during and after the electoral activities.

11. INFLUENCE OF MONEY:
We did not observe any incident of vote buying, inducement or exchange of money.

12. INTERFERENCE BY ELECTION OFFICIALS
There was no interference with the process by election officials.

13. CONCLUSION
The conduct of the Ondo State election is a great improvement from what we have witnessed in the past. The NBA commends the people of Ondo State for their peaceful conduct during and after the elections. We wish to also commend INEC and the security agencies, while we acknowledge that there is room for improvement.

15. There should be more voter education particularly in the local languages of indigenes. This has become imperative as a result of voter illiteracy which the team observed in some parts of the state. INEC should do more in this regard.

16. Accreditation should be done electronically as opposed to the use of paper/analog process which usually slows down election process as observed in this election.