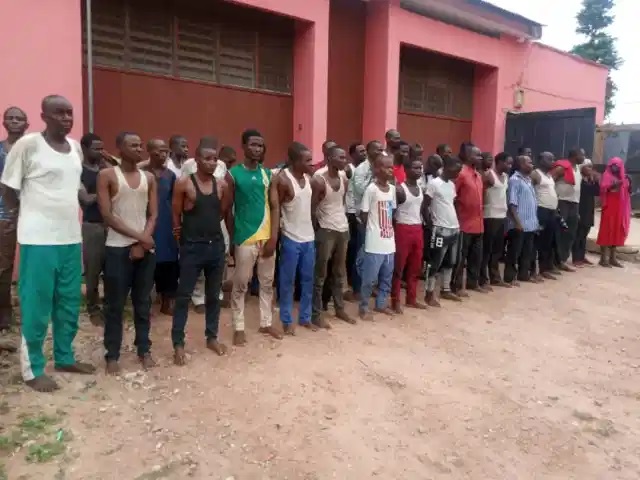 The Ondo state security outfit, code-named Amotekun, has outlined the reasons for the eviction of 42 Fulani men who invaded the state’s Okitipupa council region last Thursday.
At about 10 p.m., the illegal tourists were loaded into a vehicle and unloaded in front of the Okitipupa Army Barracks.

Their presence in the community heightened anxiety as residents raised alarm and reported the incident to Amotekun.

During interrogation by the personnel of Amotekun, the illegal visitors said they were in the state for security training. Addressing newsmen in Akure weekend, on the arrest of the invaders, the state Commander of Amotekun, Chief Adetunji Adeleye, said the 42 men were arrested following their inability to explain their mission in the state. Adeleye said, “right now we look at them as a security risk to the state”.

According to him, the alleged invaders, who were from Kano and Jigawa states, claimed to have been invited to the state by an agent who would hire them as security guards to track and direct the pipelines.
“In the last three days, there have been reports of suspected Fulani men invading the state.
Our intelligence revealed an influx of people, especially in the state’s Okitipupa Local Government Area.

“So, we monitored and we found out that they converged in front of the army barracks in Okitipupa.

“They were there for a couple of hours and at that point, we tried to find out what their mission is, but because they couldn’t give satisfactory explanations we moved them to our local office first in Okitipupa to try to debrief them and from the debriefing at Okitipupa, we had to move them to the state headquarters for proper debriefing.

“All they were told was that they were going for training. Training for who, by who, or whatsoever, they do not know.

“The sponsors happened to also claimed that they belong to an NGO, that they contracted out the training to a consultant who was supposed to train their men.

They said they were going to train them as security guards. “But as part of our discreet investigation, we found out that the so call consultant had been arrested in Delta State and I confirmed from the Delta State Police Command as of today that he’s still in their custody. So, we intend to release them, we will release all these ones and ensure that they are taken back to their states” He explained that they decided to release them because “right now we look at them as a security risk to the state, and at this point, we invited the sponsors, the head of the NGO and Chairman of the board have also offered an explanation.

“But we feel that we should let the people of Ondo State know that there is no crisis in Okitipupa Local Government.

“The way it was portrayed as if some hoodlums or militants had taken over is not true.

“We want to reassure the good people of Ondo State that we are firmly on the ground in conjunction with other security agencies that there is no problem. People should go about their businesses normally.

“We are not leaving anything untouched and we have ensured that our intelligence unit had covered the entire state and we’ll alert the public on any wrong move.

“We intend to provide escort to lead them out of Ondo State back to wherever they came from”. Meanwhile, the state government has urged the people of the state not to take laws into their hands and should not hesitate to report any strange movement in their community.

The state Commissioner for Information and Orientation, Donald Ojogo, commended the Amotekun corps for handling the situation maturely and professionally. Ojogo said “The security situation we found ourselves in the last 72 hours was a very precarious one.

If not that it was discretely and professionally handled and well managed by officials of government particularly Amotekun Commander and SSA on security, the situation would have degenerated to the extent of lynching and jungle justice.

“It was almost getting to that point when they were seen in a suspicious manner in Okitipupa but the governor had to rise up to the occasion to ensure that they were given adequate protection so that jungle justice had to be avoided. That was one of the key points that were achieved in the last 72 hours.

It was a very frightening situation. “Ordinarily looking at the insecurity situation in the country, some of these persons would have been molested if not killed but that is not what we want. Whatever is worth doing must be well done and we ensured as a government that they were well protected and taken care of until they were moved out of the danger zone to akure.

“But from this moment people should not take laws into their hands even when movements that are suspicious are identified. Residents of the state must ensure that the relevant authorities are alerted particularly, Amotekun. “That is the best way to handle the precarious security situation we found ourselves in this country. Security is everybody’s business, it’s not only the business of Amotekun, Police, and Army”

“That is the best way to handle the precarious security situation we found ourselves in this country. Security is everybody’s business, it’s not only the business of Amotekun, Police, and Army”

“I have the instructions and the directive of Mr. Governor to use this medium inform everybody, particularly, government officials that any security situation we found ourselves, the first point of contact must be security agencies.

“They are the only points of contact. Even I, as Commissioner for Information and spokesperson of the government, is not authorized to speak on issues related to insecurity, no matter how insensitive it is. As long as it is a security matter, we do not want anybody to speak without proper authorization” Ojogo other security agencies turned down Amotekuns request to transfer the youths and that informed the decision to move them out of the State entirely with an escort.

The Fulani men were allegedly billed to have their training in the barracks but luck ran out of them before they could settle down in the barracks. A security source said that the other agencies were contacted about their invasion but no action was taken, which prompted Amotekun to take the issue up.

He said “things went awry when the people of the community noticed the unusual movement of the young men and raised the alarm. All the security agencies distanced themselves from the suspected invaders.

“There are more to the invitation of the men to Ondo state than what many might think but the decision of the state government to send back is the best to avoid calamity. “I don’t know why the authorities here refused to take up the issue especially when Amotekun beckoned on us to take over the matter because it’s a pure security risk”.

The source added that “I know our command was contacted but the request to take custody of the suspects was turned down for unknown reasons”.