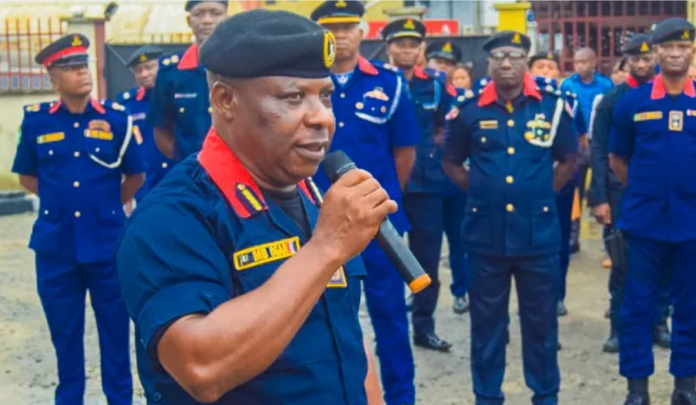 The Nigeria Security and Civil Defence Corps (NSCDC) in Rivers, has impounded five trucks, and arrested a suspect for alleged oil theft.

The State Commandant of the Corps, Michael Ogar, said this in a statement issued by the Corps spokesman Olufemi Ayodele on Friday in Port Harcourt.

He said that the trucks were impounded for conveying petroleum products without haulage licences and other required documents.

The commandant said that the suspect, Abubakar Suleiman, 20, was arrested for conveying illegally refined products in a truck in Port Harcourt.

“Based on sustained intelligence, our anti-vandal team arrested one suspect who loaded petroleum products in hidden tanks on the truck and used animal feeds to cover them.

“So as to divert the attention of security men on the way, but with the eagle eyes of our men, the products were discovered and the truck was impounded and the suspect arrested.

“Following a tip off, we also impounded a long truck with registration number: OGUN DED 643 XB. The suspects upon sighting our men took to their heels,” he said.

“While on routine patrol at Mbiama in Ahoada West Local Government area, the Rivers Joint Task Force, made up of the Nigerian Army, the Navy, the Air force, the Police and the NSCDC impounded tree trucks for transporting illegally refined petroleum products.

Mr Ogar said that another truck loaded with 36,000 litres of PMS was impounded, adding that the last three trucks had been taken to the Command’s exhibit yard at Ogbogoro jetty.

“Let me use this opportunity to affirm that we will not relent in the fight against oil theft and illegal dealings in petroleum products in Rivers.

“Consequently, the NSCDC Rivers Command will continue to collaborate with relevant security agencies to rid the state of illegal oil bunkering.

“I can assure you that after a thorough investigation, the suspect would be charged to court while the tankers and the content would be forfeited to the Federal Government.

“I also want to warn those who have refused to repent from engaging in such heinous crime would face the full wrath of the law.”