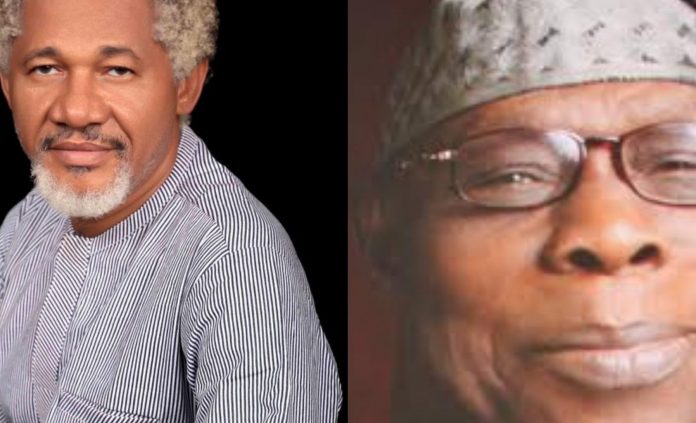 The recent proposition of Former President Olusegun Obasanjo that Oil belong to Nigeria and not Niger Delta aroused my indignation to an unimaginable degree. I am angry not because I find his position to be very wrong and a bundle of falsehood but because he is deliberately miseducating and misinforming Nigerians on important issues like true fiscal federalism and restructuring of Nigeria . It remains an incontrovertible fact that the Nigerian Federation as presently constituted is built on a pack of lies and thus can never be true no matter how hard people like Obasanjo try .

Obj can fool and deceive the young generation with rhetorics and grammar but not me and my generation. It may interest our children to know that Obj was the undertaker of the funeral of the 1946 , 1951 , 1954 , 1960 and 1963 constitutions . As military head of state he in 1979 supervised their replacement with the 1979 constitution which the 1989 and 1999 Nigeria constitutions are essentially fashioned after .

Obj ‘s current statement that Oil belongs to Nigeria and not the people of the Niger Delta clearly shows that he does not stand for restructuring , true fiscal federalism and a unified progressive Nigeria where there is peace , equity and justice.

Obj , his co military juntas and cabals are responsible for the state of quagmire that we find ourselves in Nigeria today . They have foist on us a military decree with the cover page of a constitution without our consent . With this evil and fraudulent document they have so far successfully protected their loot of our common wealth, hoping and fighting hard to sustain it until they die . Small wonder Obj can today posit mendaciously that it is wrong and unconstitutional for the people of Niger Delta region and the people of Zamfara to lay claim to the mineral resources found in the area. Small wonder today Obj has the effrontery and temerity to say: “No territory in Nigeria, including the minerals found therein, belongs to the area of location and this remains so until the federation is dissolved” .

Today the people of the Niger Delta are treated like animals and nobody cares Today the rest of the country is not affected by the soot that is slowly killing them . Nobody is talking about the degradation of their environment by reckless pollution . Nobody cares about the abject poverty in the Niger Delta . The people can’t farm and they cant fish to sustain themselves .

It is incorrect for Obj to clam that because the territory of Nigeria is indivisible therefore it’s resources found therein belong to Nigeria and not to the component part where the resources are located . This may be the position of our fraudulent constitution but not the position of the international law as Obj claims .

Obj erred when he tried to support his arguement that the oil of Niger Delta people belongs to Nigeria with defence of the Niger Delta by the Nigerian Federal government. Hear him:

“If there is a threat of violence to any part of Nigeria today, including the Niger Delta, it is the Nigerian Military, backed by any other machinery that can be procured or established at the federal level, that will respond to any such threat”.

This arguement is very baseless and useless because in all Federal system of government like Nigeria and America the defence of the entire country is the sole responsibility of the central government notwithstanding who owns the natural resources in it. If we follow his line of arguement then it will be correct to say that because the oil in Alaska belongs to individuals and the State of Alaska, then the central government of America in Washington , will not be duty bound to defend Alaska from an attack by Russia or if the oil deposit in the Niger Delta belongs to the people of the Niger Delta then the Federal government of Nigeria in Abuja will not be duty bound to defend them from an attack by the Republic of Cameroon.

The truth of the matter is that, It is most unfair, unjust and inequitable for Obj’ or anybody’ to propose that those domiciled in the locations mineral resources are entitled to have more of the material benefits accruing from the minerals when in actual fact they are entitled to everything and only owe the central Government tax as it was done in 1963 . Obj and co should be ashamed of themselves and seek forgiveness from our creator for heaping on Nigeria an unworkable system that has retarded the growth of Nigeria where every component part go to Abuja with their plates every month to get a slice of what belongs to the people of the Niger Delta instead of working hard like in the pre military incursion into politics when there was healthy competition amongst the regions who built their roads , established their universities , hospitals , schools and ran their economy from the proceeds of what was generated from their regions only paying tax to the center .

Frankly, if the people of Niger Delta and Zamfara are left to own their oil and gold paying tax to the Federal Government, other component states will strive to tap in on their own human and natural resources instead of being unproductive because as it stands today there is no poor state in Nigeria.