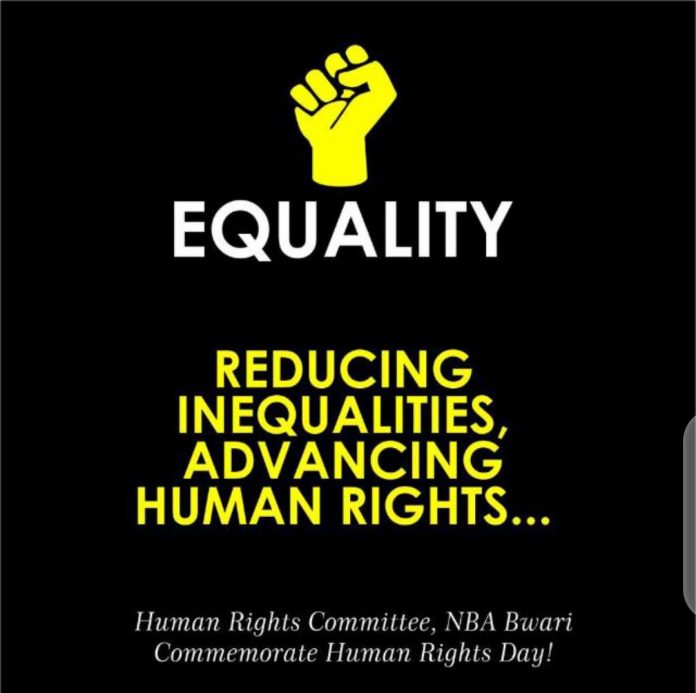 International Human Rights Day is a day set aside to celebrate the dignity and rights of all human beings all over the world. The day is commemorated to mark the day the United Nations National Assembly adopted the universal Declaration of human Rights (UDHR) on December 10, 1948. After the Second World War, there became a need to harmonize all nations and make them feel a sense of belonging that we are still one human, the United Nations National assembly thus adopted the declaration which till date is still celebrated.

It is equally important to note that it was on December 1o, 1996 that the then President of South Africa, Nelson Mandela signed into law a new constitution that upheld racial equality and removed apartheid. Thus, human rights day is very important to celebrate in the sense that it reminds us that we are one human, equal before the law and society.

Bringing it home, in Nigeria, the constitution of Federal Republic of Nigeria, 1999 as amended stipulates for the Fundamental Rights of all citizens. The right are contained in sections 33 – 44 and includes but not limited to Rights to Life, Rights to Dignity of Human Persons, rights to personal liberty, rights to fair hearing.

The world and Nigeria in particular is agog with issues of human rights abuses ranging from inhuman treatment, torture, discrimination, inequality, intimidation, bully etc. Cases abound where citizens have been killed indiscriminately without any justification by people in position for their own selfish gain and they get away with it.

Issues of poverty, gender inequality, and brutality by government agencies hold sway in the country. These ills are antithetical to the vision, mission and resolution of the United Nations General Assembly on declaration of Human Rights.

It is because of these anomalies and many more that the theme of this year’s International Human Rights day is very instructive. Equality: Reducing Inequality, Advancing Human Rights. This theme is coming at a time that the world and Nigeria is bedeviled by all sorts of abuse of Equality as one of the Human Rights objectives.

Equality means all human being equal before the law, before society and before God. The theme of this year strives to awaken our consciousness of the need for everyone to be treated equally, be it by individuals, group of persons or Government. Nobody should be discriminated upon on the basis of his class, race, tribe, religion or statue. We should all strive to condemn, prevent, eschew, remove anything that will portray that we are unequal by any means but rather promote, advance, encourage and proclaim equality of everyone in the world and Nigeria in particular.

There are so many instances whereby people’s human rights have been abused; it dates back to the creation of Nigeria itself.
In June this year, a student of Premier academy, Lugbe, Abuja died as a result of rape. The story has it that there were traces of left over condoms in her private part. This incident was said to have happened in the school premises. This girl, Keren Akpaghar, a promising young girl died for nothing because of the wicked and animal nature of some people. This is a clear case of inhuman treatment. If those that perpetrated that act believe in equality and are sensible, there won’t be need to rape this girl.

Just recently, it has been in the news of the death of one Sylvester Oromoni of Dowen College, Lagos. The story had it that some senior students wanted to initiate him into their cult groups but the boy refused and they maltreated him till he died. This is just a secondary school and thus kind of inhuman treatment is happening, it only shows how our system has decayed.

Few months ago, a combined team of police and army opened fire on some protesters long Kubwa expressway in Abuja and killed some of them. Their offence was that they were protesting against the continuous detention of El zazaki. Opening fire on innocent citizens is it the best way of enforcing law and order; this is done by the government whose duty is to protect life and citizens of people.

Also, few months ago, a lawyer by name Maxwell Okpara of NBA Bwari Branch was deprived access to his client, Nnamdi Kanu insisting that he should remove his trousers, belt and shoes before he would get access. Where is then the right to dignity of human person as enshrined in the Constitution? There are so much ills and anomalies going on in this country which cannot be exhausted here.

NBA Bwari Branch through its human Rights Committee condemned such acts of man’s inhumanity to man and all ill treatment meted on citizens of this country and individuals generally. We call on the government and the security agencies to investigate any breach of human rights and bring to book those that are found wanting.

Furthermore, rather than engage in such acts of inequality and human rights abuses, NBA Bwari Branch encourage every child to go to school and ensure that that child is protected from bully and other form of harassment from other children and teachers. We should advance that women (the girl child) should go to school and have a say in the government of the day and the society at large.

We should strive for everyone to live a peaceful and normal life; poverty should be eradicated so as to give everyone a sense of belonging.
There should be even distribution and allocations to tribes and people should not be deprived what is due to them.

Man’s inhumanity to man and all sorts of brutality by persons and government should be discouraged.
In all, we should embrace our diversity and demand that we are all treated without any kind of discrimination. This does not mean that we should think alike or act in the same way but that we should work together to make the nation better especially as regards Equality and Human Rights

As an Organization, the Human Right Committee, NBA Bwari Branch and the entire Branch join the whole world in commemorating the International Human Rights day for this year and wish everyone a wonderful day. Let us continue to be a vanguard of truth and what is right and don’t forget that, everyone is equal before the law.