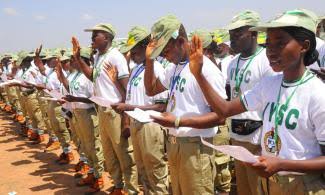 The management of the National Youth Service Corps (NYSC) has reacted to recent claims made against it.

The NYSC debunked an allegation that in collaboration with the Minister of Youth and Sports Development, Sunday Dare, it has mobilized corps members in Oyo State to work for the state Governor, Seyi Makinde, to influence the governorship election in the state.

The NYSC management in a statement signed by its Director of Press and Public Relations, Eddy Megwa, on Wednesday noted that the allegation by a political group made the rounds in the media (not SaharaReporters), where the scheme was said to have given the minister leverage to mobilise the corps members to work in Governor Makinde’s favour.

The scheme described the allegation as false, saying that the propensity of putting corps members in harm’s way was “extremely dubious, absurd, malicious with grave security implications.”

The statement made available to SaharaReporters on Wednesday read, “The attention of NYSC Management has been drawn to the allegation by a political group making the rounds in the media to the effect that Mr Sunday Dare, Minister of Youth and Sports Development, in collaboration with NYSC Management, Oyo State is mobilising Corps Members to influence the outcome of the forthcoming gubernatorial election in the State in favour of Governor Makinde.

“Management wishes to state emphatically that the allegation which has the propensity of putting Corps Members in harm’s way is extremely dubious, absurd, malicious, with grave security implications.

“At no time did the Honourable Minister address Corps Members and Management of NYSC in Oyo and directed them to favour a particular candidate during the forth-coming elections. Politicians are strongly advised not to drag corps members into politics as they are completely apolitical and are ready to serve their fatherland selflessly. It is totally false, concocted and despicable.

“Corps Members’ involvement in national elections in the past decade has without doubts, conveyed an appreciable measure of credibility to the entire electoral process which has earned the National Youth Service Corps the commendations of international community, governmental and non-governmental bodies as well.

“Management views the fallacious report with great concern, and appeals that the Scheme should not be used to score political points.

“Management wishes to reassure Nigerians that the Scheme shall never shirk its responsibility of ensuring that Corps Members discharge their duties in the forthcoming national elections with the highest degree of patriotism, neutrality and discipline which is the hallmark of the National Youth Service Corps.

“Desperate Politicians and social media platforms are advised to be kindly guided in their utterances in order not to put the safety of Corps Members, which is the cardinal policy thrust of NYSC Management in jeopardy.”