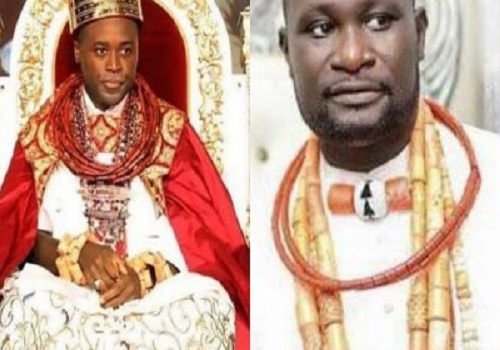 Embattled Warri High Chief Ayirimi Emani lost his traditional Ologbotsere title on Tuesday. The Olu of Warri, Ogiame Atuwatse lll, announced the abolition of the title.The pronouncement stripped Emami off his role as the traditional prime minister, a chieftaincy title he held for four years.

Ogiame Atuwaste lll made the declaration during a meeting with descendants of the Ologbotsere family at his palace in Warri South Local Government Area of Delta State.The monarch also told all sons and daughters of Warri Kingdom to forthwith, cease addressing Emami as the Ologbotsere.“We have taken time to ponder and have arrived at our final decision,” the royal father told his audience.Notable Itsekiri chief, Brown Mene, who read the monarch’s address, assured of Atuwaste lll’s respect for the Ologbotsere descendants, just as he noted that many were titled Chief holders of the kingdom.

There is no Ologbotsere again. Nobody should parade in that title. You remember the king dissolved the Council of Chiefs and have been re admitting and revalidating titles and has also reconstituted the council of Chiefs. Nobody should relate with anyone in the title as Ologbotsere.”Members of the descendants of the Ologbotsere family at the meeting include family head, Pa Jofotan Oporakun; Secretary-General William L. A. Anukun; Mr. Fred Omaghomi, Besidane Esimaje, Omaghomi, Hon. O. J. Nana and Mr. Samuel Okorodudu.Other palace chiefs at the meeting were: Iyatsere and Chairman, Warri Council of Chiefs, Chief Johnson Amatserunleghe; chiefs Gabriel Awala (Uwangue); Patrick Iralaju; Maleghemi A.; Eugene Ikomi (Secretary, Warri Council of Chiefs); Solomon Arenyeka among others.Some princes of the kingdom were also in attendance.

Emami was suspended by the Ginuwa I Ruling House in the build-up to the selection of Olu-designate.He had opposed the selection process that threw up Tsola Emiko as the Olu-designate, citing provisions in the 1979 Edict, a position he held until the monarch’s coronation on August 21.The embattled former Ologbotsere failed to appear for the readmission and revalidation exercise held at Ode-Itsekiri, the ancestral home of the Itsekiris.It was learnt that some chiefs who could not attend within the stipulated period, communicated with palace authorities and were duly readmitted and later revalidated.

Embattled chief: monarch’s action is of no effect

To embattled Chief Ayirimi Emami, the abolition of his office as the Ologbotsere “is of no consequence or effect.”Emami made declaration in a swift reaction to a pronouncement by the Olu of Warri, Ogiame Atuwatse III, abolishing the Ologbotsere traditional title in Warri Kingdom.When contacted by our reporter, Emami said the pronouncement made at the Aghofen (Palace) within Warri metropolis will not affect him.He said: “As far as I am concerned, we are in court and I do not recognise him as the Olu of Warri. He was neither properly selected nor crowned. So, he cannot parade himself as the Olu of Warri.“To me, he remains Prince Tsola Emiko and not the Olu of Warri. His action (stripping him of the title) shows that he was not properly crowned because if he was, he would know the implication of what he is doing.

“The throne of the Olu of Warri cannot be for sale to the highest bidder and we will see to that.”He told our reporter yesterday that the next line of his battle with the popular monarch would be to stop him from parading himself as the Olu of WarriEmami told his supporters to remain calm, stating that the battle has only shifted to a higher gear.The unfolding development is the culmination of a long seething war between the monarch and Emami, whose disqualification of the monarch from the contest to pick the 21st Olu in April led to an uproar.

The battle degenerated further when the chief spurned an invitation from the palace to chiefs and other traditional title holders of the kingdom to revalidate their titles by paying homage to the new monarch.Before the invitation, Emami had dragged the monarch to court, challenging his position as the occupant of the coveted throne on the ground that he was not qualified on the basis of an extant edict.