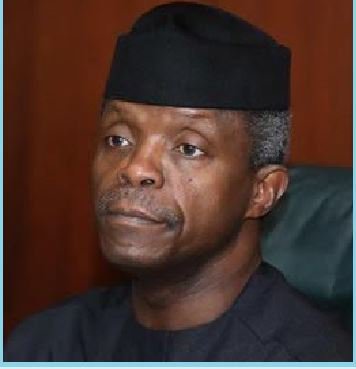 No Imbalance in Federal Appointments – Osinbajo

He blamed the elite for fuelling ethnic and religious division and tension, urging Nigerians to always elevate merit above the push for quota system.

Osinbajo, who identified corruption as the greatest problem confronting the country, praised the Acting Chairman of the Economic and Financial Crimes Commission (EFCC), Ibrahim Magu, saying that he is competent.

He said: “Magu is a highly competent figure. His fight against corruption has been unprecedented. We must insist on merit, which many people don’t believe in. Merit must come before quota.”

The Vice President also reflected on the conflict between the Minister of State for Petroleum Resources, Dr. Ibe Kachikwu, and the Group Managing Director of the Nigeria National Petroleum Corporation, Dr. Baru, saying that Baru followed the guidelines in the discharge of his duties.

“When I was the acting President, I was not the Minister of Petroleum. I could ask Baru to report to the Minister of State. Is it the Board of the NNPC or the NNPC Tenders Board that approves contract? The answer given by the Bureau of Public Procurement was that it was the Tenders Board.”

“There could be conflict between ministries. The only reason it became an issue was that it came to the public. NNPC law says that the president approves the contract that exceeds a certain amount.”

“In the previous law, it could be taken to the Council of Ministers. When it was amended, it is the President that approves and it may not come to the Federal Executive Council.”

The Vice President spoke in Lagos at a one-day ‘Greater Nigeria Pastors Conference’ organised by the Coalition of Apostolic Leaders, led  Pastor  Wale

Adefarasin and Pastor Abayomi Kasali. Its theme was ‘Towards a better Nigeria’.

Other speakers were the Presiding Bishop of the Redeemed Evangelical Mission, Dr. Mike Okonkwo, and the Director-General of the Institute of National Transformation, Prof. Vincent Aniagbogu.

Rev. Kasali said the conference underscored the coalition’s passion for the nation and its belief in its destiny, lamenting that some people are peddling falsehood in the social media about Nigeria.

Urging the priests to distance themselves from the antics of national detractors, he said the church should assist the government in repositioning the country.

Okonkwo urged Christian leaders to re-evaluate their disposition to politics and public life, adding that they needed a synergy on how to positively influence the system.

He said: “When politicians come to you (pastors) and they give you money and bags of rice, and they win election, when do they come back to you? They only come back in four years’ time.”

The cleric raised many questions for Osinbajo to answer. These include the Fulani herdsmen’s violence, imbalance in federal appointments, including appointments of security chiefs, Ibe Kachkwu/Baru tango, conflicts between Magu and the Directorate of State Services (DSS), the return of Abdulrasheed Maina, Pension scam, anti-graft war, Nigeria’s membership of G.8 countries, reaction to IPOB, suspension of Babachir Ali and restructuring.

Chiding the elite for fueling division in the county, Osinbajo said: “Nigerian elite, whether political, religious or business, think alike. They are driven by the same motivation, which is self-serving. They throw the ethnic card and draft the masses to their battle. But corruption and poverty do not know religion or race. When Yoruba, Igbo, Ijaw men come together to steal money, they don’t argue. They are brothers.”

“Nigeria needs a new tribe for a new Nigeria to emerge. The challenge is how to populate the new tribe.”

The Vice President noted the concern of Nigerians about the menace of herdsmen, assuring that there would be a permanent solution.

He said: “What we need to do is to prevent the crisis and thereby prevent its escalation. Some of the men are from outside the country.”

Osinbajo said the Federal Government has been fair to all states in terms of appointments, maintaining that the so-called imbalance is not true.

Tendering vital statistics, he added: “The highest appointees are from Ogun, Imo, Kano, Edo and Anambra. Southeast has five states. It has four senior ministers. Where is the imbalance? At a time, there was no service chief from the North, and there were two from the Southeast and nobody argued then.”

“Northern states of Borno, Yobe, Sokoto have no senior minister despite their huge vote for President Muhammadu Buhari in 2015.”

He added: “Does Islamic banking profit us? If it profits us, do it. We don’t even know who are the directors of other commercial banks we patronise.”