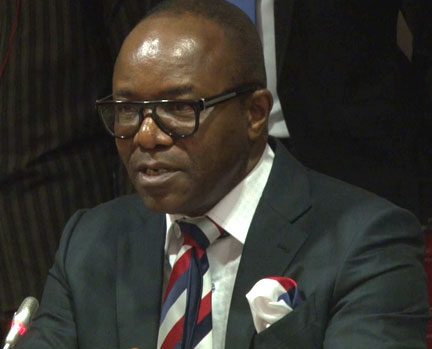 Ibe Kachikwu, minister of state for petroleum resources, refused to speak with reporters at the end of a meeting with President Muhammadu Buhari.

Dressed in a black suit, the minister arrived the presidential villa around 11:35am and walked straight into the president’s office.

He left after over an hour. Asked what the meeting was about, Kachikwu said: “No comment.”

Like Kachikwu, Baru also did not speak with state house correspondents.

The meetings took place three days after a letter which Kachikwu wrote against Baru was made public.

In the letter, Kachikwu accused Baru of insubordination. He also alleged that the NNPC GMD approved a $25 billion contract without following due process.

The letter has been generating some reactions.

But Ibe Kachikwu’s leaked letter to the president suggests that he hasn’t been in touch with president – the minister of petroleum.

It also suggests that the board of the NNPC is in disarray. The NNPC Act says ‘’ the Board shall meet not less than four times in each year and on such other occasions as the Board may consider necessary’’. So, if the board had been meeting as the law stipulates, why were Kachikwu’s complaints not presented to the board?

Sadly, Kachikwu’s position, as minister of state, is made difficult by the law regulating and guiding the NNPC. Had Kachikwu been a substantive minister of petroleum, his case against Maikanti Baru, NNPC’s GMD, would have been stronger.

President Buhari must have relied on the following provisions of the NNPC Act in appointing Kachikwu as the chairman of the board of NNPC:

‘’The Chairman shall be a Minister in the Government of 1979 No. 44 the Federation to be known and styled as the Minister of Petroleum Resources….

‘’There may be appointed by the President an Alternate Chairman who may, pursuant to any general or special delegation given in that behalf by the Minister exercise the powers conferred upon the Minister or Chairman under this Act: Provided that nothing in the foregoing shall be construed as preventing the exercise by the Minister himself of any power so delegated.’’

And technically, as the Act suggests, Kachikwu was performing the functions of the substantive minister on the board. In this case, Kachikwu was carrying out the job of President Buhari, who doubles as the minister of petroleum.

NNPC Act also implies that some contracts – probably some of the ones that Kachikwu said didn’t go through the board – can be authenticated by the chairman of the board. And that chairman could be President Buhari.

‘’ The fixing of the seal of the Corporation shall be authenticated by the signature of the Chairman and any other person authorised in that behalf by the Board.

‘’Any document purporting to be a contract, instrument or other document duly signed or sealed on behalf of the Corporation shall be received in evidence and, unless the contrary is proved, be presumed without further proof to have been so signed and sealed.’’

And for issues concerning retirement, the Act uses the word MAY when referring to the responsibilities of the board.

With these provisions, some could argue that there are sufficient legal backings for not carrying the minister of state along in retirements, contracts and on sundry issues. Obviously the president must have been carried along. But this shouldn’t have been the case considering the vast experience the minister of state brought into government. This experience ought to have been harnessed for the good of Nigeria’s oil and gas industry.

As long as the president continues to function as the minister of petroleum, the kind of issues Kachikwu complained about are bound to come up.This has to be put in perspective before calling for the sack of any of the dramatis personae in this case.

It is high time President Buhari appointed a substantive minister of petroleum.