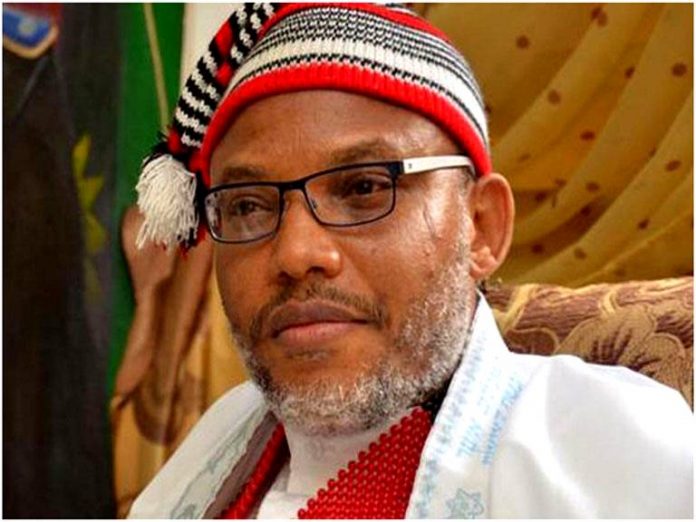 An Igbo Tink-Tank group, United Igbo Elders Forum, UIEF, has described the continued detention of the leader of Indigenous People of Biafra, IPoB, Nnamdi Kanu by the federal government as an  affront to Ndigbo.

The group said that for the federal government to have ignored the voice of the elders; the demand by the United Nations, UN; the judgment of  the Court of Appeal and other voices of reasons and went ahead to prolong this case amounted to an assemblage of a time bomb.

National Coordinator of the forum, Justice Alpha Ikpeama who stated this  in Onitsha, Anambra State, via SMS, shortly after their emergency meeting, said there was no need for the federal government to have gone to the Supreme Court to challenge an erudite judgment delivered by the three wise men at the Appellate court.

According to Ikpeama: “It  is now  crystal clear to  all and  sundry that it is Buhari and Malami that have been holding Nnamdi Kanu in captivity and  the implication is that the entire Igbo  race is being held in captivity by the duo of Buhari and Malami, with its attendant political undertone.

“Elders, UN, court, others, have spoken and FG refused. It has a time bomb. Words of  elders are words of wisdom. Enough is enough. It is Malami and Buhari that are holding Kanu. No need for Supreme Court. This shows that Buhari and Malami are holding Ndigbo. It has a political undertone. Justice delayed is justice denied. FG has only but two options to release  Kanu. The two options are hinged on the Appeal Court verdict or political solution. If FG can dialogue with bandits, why not with Ndigbo?  We commend all  those who have so far showed concern for their objectivity”, the statement added.

Ikpeama contended that it is absurd and an affront to the psychology of Ndigbo for President Muhammadu Buhari to tell Igbo elders shortly after the arrest and rendition of Kanu from Kenya to Nigeria that Kanu should go through the judicial process, only for the federal government to disobey the recent order of the Court of Appeal to release him from detention.

The three-man panel of judges of the Appeal Court had in its unanimous judgment, quashed the remaining seven-count charges preferred against Kanu by the federal government and consequently discharged him.

However, the federal government headed to the Supreme Court to challenge the Appeal Court judgment, a decision which the United Igbo Elders are criticizing.