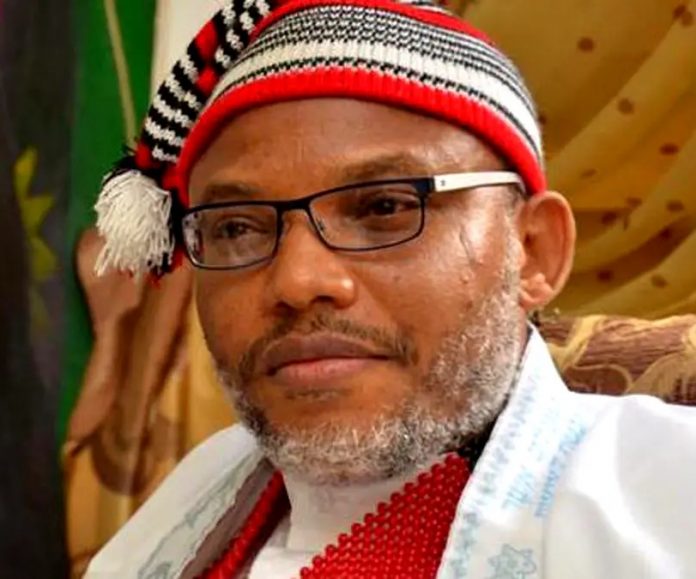 Nnamdi Kanu, the leader of the Indigenous People of Biafra, has slammed another N20 billion suit against the Attorney-General of the Federation, Abubakar Malami.

Kanu, through his lawyer, Aloy Ejimakor, stated that the AGF defamed the IPOB leader when he claimed that the latter jumped bail, and had asked for N20bn for damages.

This is coming barely four days after the initial N20bn suit filed by Kanu against Malami was discontinued.

However, in the latest suit dated November 21, Kanu demanded compensation following alleged defamatory and libellous claims against him.

The suit was contained in a letter sent to Malami titled, “RE: Pre-action notice and formal demand for settlement of the claim of defamation/libel of the character of Mazi Nnamdi Kanu grounded on your false, defamatory and libelous publications that Mazi Nnamdi Kanu jumped bail.”

Sharing copies of the document on his Twitter page yesterday, Ejimakor said: “Yesterday, I served on AGF Malami a Legal Notice (as required by law), notifying him of my intention to take legal action against him for his defamatory & libelous statements that #MNK jumped bail.”

Kanu, through his lawyer, said Malami’s claim that he jumped bail despite a court order clearing him was libellous.

Condemning Malami’s remark, Ejimakor said in the letter, “Given the said judgment of the Abia State High Court, your above utterances were false, malicious, and reckless and they were read and heard worldwide and portrayed our Client in light.”

According to the letter, Kanu demanded “the sum of N20,000,000,000.00 (Twenty Billion Naira only) being general and exemplary damages;

“An unreserved personal letter of apology, to be prominently and boldly published full-page in two Nigerian Newspapers of national circulation, namely: Guardian Newspaper and Sun Newspaper.

“You shall write and deliver to your superior officer(s) and/or your employer(s) a Legal Opinion to the effect that our Client did not jump bail given the 19th January 2022 Judgment of the High Court of Abia State.”