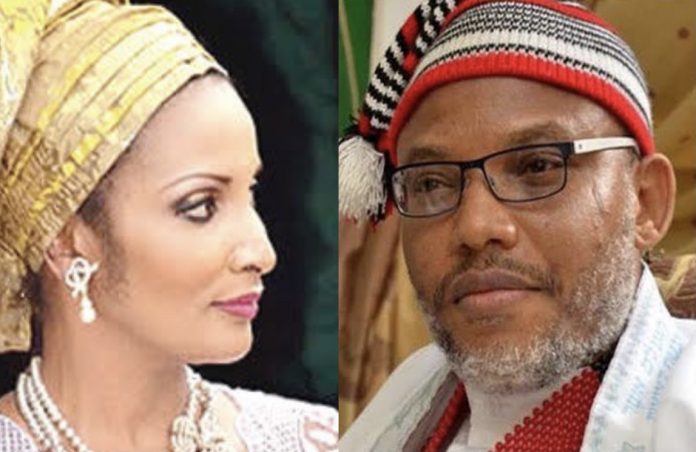 Bianca Ojukwu, wife of late Biafra leader Chukwuemeka Odumegwu Ojukwu has reiterated call for the released of Nnamdi Kanu, the leader of the outlawed separatist group, Indigenous People of Biafra, (IPOB), being held by the Muhammadu Buhari regime.

Mrs Ojukwu noted that doing so would help resort to peace especially in the South-East geo-political zone adding that “no nation that holds its people hostage can ever have peace.”

The former Nigeria Ambassador to Spain renewed the call on Saturday in Owerri, at the 11th edition of Dim Chukwuemeka Odumegwu Ojukwu Memorial Lectures. The memorial event was organised by the Movement for the Sovereign State of Biafra and Independence Biafra Movement (MASSOB-BIM).

Mr Kanu has been under detention since he was extraordinarily renditioned from Kenya in June 2021 by the federal government. Though the Court of Appeal in October quashed charges preferred against Mr Kanu, the Buhari regime refused to release him and successfully got the court to nullify his freedom.

His arrest coincided with heightened insecurity in the South-East with IPOB apologists enforcing a weekly Monday sit-at-home across the region which paralyses business activities.

Mrs Ojukwu, however, advised Nigerian youths to shun vices and other anti-social conducts now threatening the peace and development of the country.

She said that the current wave of criminalities, killings, kidnapping and other types of the country was on a worrisome path to destruction.

Though she attributed the problem to lack of job opportunities, Mrs Ojukwu said it was wrong for today’s youths to resort to the use of hard drugs, leading to crime.

She however, advised them not to collapse the system, but to keep hope alive and seize the opportunity of the 2023 elections to vote the right people for good governance in the nation.

She argued that if the right leaders were entrusted to be in charge, several opportunities would be created for the majority of the people to be gainfully employed thereby reducing crime.

The ex-Nigeria most beautiful girl commended the Igbo people for keeping faith with the tenets of nationhood for which his late husband fought for.

She thanked the convener of the event, Chief Ralph Uwazuruike, for organising the memorial ceremony since the year 2012 to date.

Earlier in an address, chairman of the occasion and former Green Eagles coach, Fanny Amun, thanked Uwazuruike for seeking peaceful agitation by the Igbo people.

He called for continued peace and national cohesion adding that in due course, the yearnings and aspirations of Nigerians would be met.

Igbo people from the five states of:Abia, Enugu, Ebonyi, Anambra and Imo  attended the event and displayed various types of masquerades and other  cultural dances.