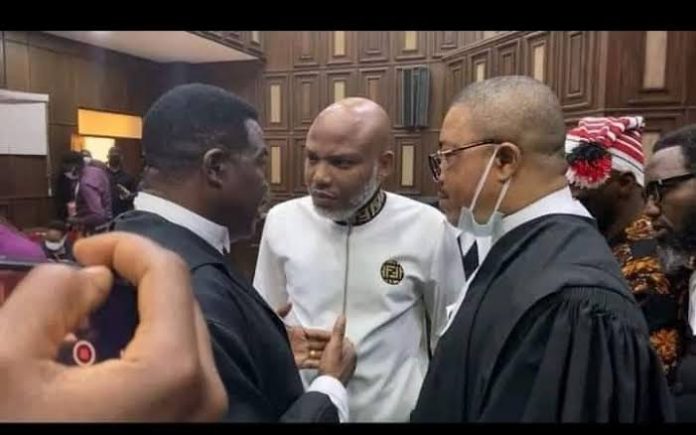 The Court of Appeal, Abuja Division on Monday stood down hearing in the federal government’s application seeking a stay of the execution of the court’s judgment discharging leader of the proscribed Indigenous People of Biafra (IPOB), Nnamdi Kanu from alleged terrorism charge.

The court stood down the matter till noon today to enable FG’s lawyer response to kanu’s opposition to the motion for stay of judgment.

When the matter was called, FG’s lawyer Mr David Kaswe had informed the court that he received the counter of the respondent last Friday and received an additional counter affidavit this morning and as such would be needing a short adjournment to enable him reply the respondent.

In a short ruling, however, the three man panel of the appellate court, presided by Justice Haruna Tsalmani, declined to grant the request for adjournment on grounds that the matter before the court is one that requires accelerated hearing, adding that the issue raised by Nnamdi Kanu’s lawyer, Chief Mike Ozekhome, SAN is not such that requires adjournment to respond to.

Justice Tsalmani accordingly directed Kaswe to immediately go and do the needful before the court reconvenes by 12 noon.

The Court of Appeal had on October 13 discharged Kanu from the remaining 7 count charge preferred against him by the government.

FG had on extraditing Kanu to Nigeria from Kenya last year filed a 15 count charge bordering on terrorism against him.

Kanu through his lawyers however challenged the competence of the charge as well as the court’s jurisdiction to hear the charge based on the manner he was brought into the country.

Ruling in kanu’s application challenging the competence of the charge, Justice Binta Nyako had struck out eight of the charge and ordered Kanu to respond to the remaining seven.

The decision of Justice Nyako prompted kanu’s appeal to the appellate court, which agreed that no court in Nigeria has jurisdiction to entertain the alleged terrorism charge without first evaluating the circumstances Kanu was brought into the country to continue his alleged terrorism trial.

The appellate court accordingly held that Justice Nyako lacked jurisdiction to try Kanu based on the forceful abduction from Kenya by agents of the federal government.

The three man panel in their unanimous judgment delivered by Justice Adedotun Adefope-Okijie, held that the extraordinary rendition of Kanu by the federal government to continue his trial violated international convention, protocols and charters and as such was fatal to the case against Kanu .

The court subsequently vioded the entire proceedings of Justice Nyako since last year that Nnamdi Kanu’s started appearing before the trial court and went ahead to discharge Kanu from the remaining seven count charge.

Dissatisfied the federal government through the Attorney General of the Federation filed an appeal against the judgment discharging Kanu from the alleged terrorism trial.

The AGF in addition filed a stay of execution of the said judgment discharging the IPOB leader from terrorism allegations.

However, hearing of the motion for stay has been stood down till 12 noon.