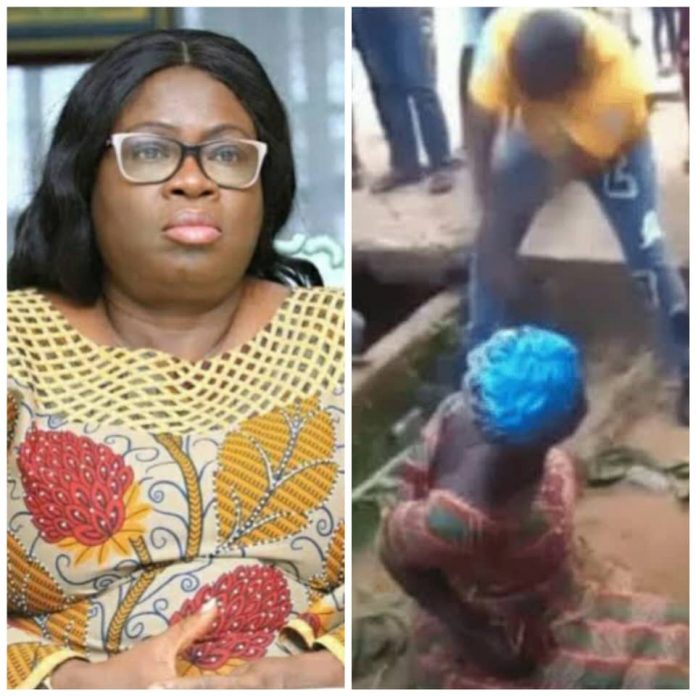 The wife of Abia Gov., Mrs. Nkechi Ikpeazu, has rescued a widow, Mrs. Amarachi Okechi, who was brutally assaulted at Umueghu Amaegbuato Community for alleged witchcraft.

Okechi was flogged repeatedly and held hostage for several days after being accused of being a witch by her husband’s relatives.

Ojiegbe said: “When the First Lady heard about it on Sunday night, she immediately swung into action to rescue the woman.

“Several stakeholders were involved in rescuing her alive, which is the first action that needed to be taken and this has been done.

“Also, the woman has been taken to an undisclosed public hospital for treatment.

“The next stage will be to address the issues surrounding the matter.

“The case will be closely monitored,” he said, adding that Ikpeazu would foot the bill for her medical treatment.

Ojiegbe said the rescue team included officials from the Gender-Based Violence Resource Centre and Office of the Wife of the Governor.

He described the allegations of witchcraft as strange to the laws of the land.

According to him, what is known to law is that no one can take the law into their hands to execute jungle justice.

“In this case, the law will take its course.

“Ikpeazu will continue to work to prevent and mitigate such violence against humans.

“She will also continue to sensitize the people against such harmful traditional practices, especially in rural communities,” Ojiegbe said.

He further said that such incidents were not acceptable in the state.

He said that the Violence Against Persons Prohibition Law had been domesticated and implemented in Abia.

Ojiegbe also said that efforts were being made for the House of Assembly to domesticate the Obnoxious Widowhood Practices Prohibition Bill, Equal Opportunities Bill, Child Rights Bill, Disability Bill, and many other rights bills.

Meanwhile, the Police Public Relations Officer in the state, SP Geoffrey Ogbonna, said that the matter had been brought to the command.

Ogbonna noted that the command had commenced a full investigation into it but no arrest had been made.