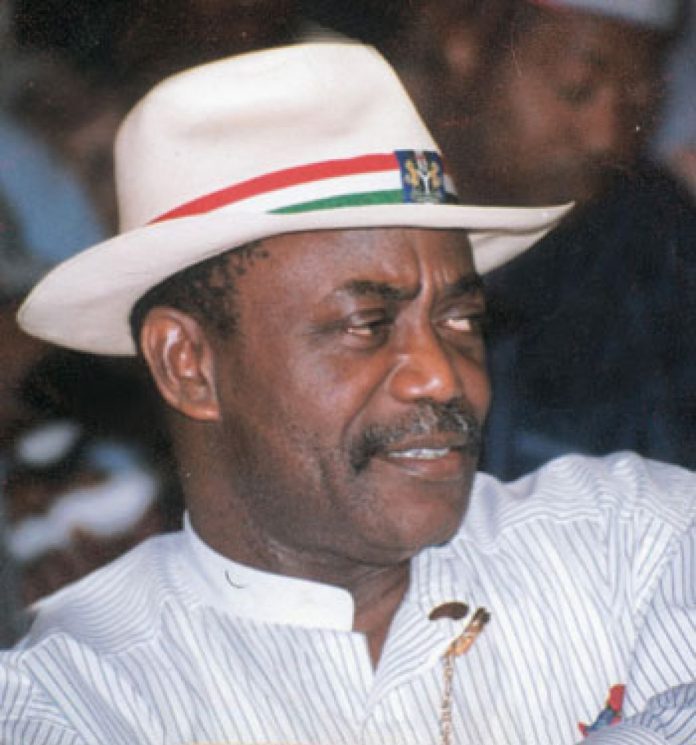 The court vacated the order made against the Nigeria Immigration Service (NIS) lawyer, Jimoh Adamu, over his alleged refusal to appear before it.

Recall that Justice Ekwo had, on Dec. 21, 2021, summoned Adamu over his failure to appear before the court on two occasions and the refusal of his office to release the travel documents of former Rivers Governor, Peter Odili after a court order.The development followed Odili’s confirmation in the courtroom that the NIS had complied with the order on Dec. 20, 2021.

Ifedayo Adedipe, SAN, who appeared for the former governor, told the court shortly after Adamu cleared the air on the controversy.The judge, who ordered the NIS to pay a N2 million fine for its conduct, directed the Attorney-General of the Federation (AGF) to take disciplinary action against lawyer to NIS for alleged unprofessional conduct.

The court also struck out the motion for stay of execution filed by the NIS against its order and ordered Adamu to appear before it on Jan. 21 to show cause why a disciplinary action should not be taken against him.But on that day, Adamu was again not in court.

An NIS lawyer, Bichi Abba, who announced appearance in the matter, said Adamu was indisposed, and the judge fixed today (Feb. 7) for Adamu to appear for the last chance.

There was, however, controversy on Monday when Adamu appeared in court, stating that his office (NIS) had complied with the order since Dec. 20, 2021.

He expressed surprise over Adedipe’s misinformation, which he said had cost him so much embarrassment.

He stressed that the NIS had since complied though he had been unable to file an affidavit to the effect.

“My lord, I sincerely apologise that I didn’t file affidavit to show course for compliance. I am under the weather,” he said.

Responding, Adedipe said he was informed over the weekend that his client’s passport had been released to him in accordance with the court order.

He urged the court to put a stop to the hearing already slated for Adamu to appear to show cause why a disciplinary action should not be meted out to him.

Adamu, who was visibly angry over the development, said he did not disrespect the court contrary to the insinuation.

He said since the order of the court, he had been reporting at the Office of the Attorney-General of the Federation on a daily basis until it was clarified that he was not at fault.

“My lord, my name has been on social media for an offence I did not commit,” he said.

Adamu then prayed the court to discharge all the orders made against him and his office, including the order to pay the sum of N2 million for failure to release the travel documents.

In the affidavit of compliance and to show cause dated Feb. 7 and filed same date, Adamu said upon receipt of court judgment and Odili’s letter requesting release of his passport dated Dec. 17, 2021, NIS complied on Dec. 20, 2021.

He said the Passport Numbers: A5021427 and B50031305 were released to Justice Njideka Nwosu-Iheme, Odili’s daughter, who is also a judge at a Federal Capital Territory (FCT) Court, in accordance with Odili’s instruction in the letter signed by him.

The lawyer averred that not only did the passports handed over to Odili, he said the ex-governor’s name was removed from the watchlist on same day in compliance with court order.

He said since Odili’s counsel misled the court in giving an order for disciplinary action against him, it had caused unnecessary hardship on him emotionally, psychologically, physically and otherwise.

He stressed that it had also put his reputation to disrepute and exposed him to public odium and redicule.

He said it was Adedipe who misled the court that deserved to be sanctioned and face the disciplinary action of the court.

Beside, Adamu averred that Adedipe did not also inform the court that the appeal in the case was entered on Jan. 20 after service had been effected on him making the Court of Appeal seized of the matter.

He said the senior lawyer’s action in the court’s proceedings on Dec. 21, 2021 and Jan. 21 deserved to be reported to the Legal Practitioner Disciplinary Committee for misconduct and appropriate taken.

Justice Ekwo, after perusing the affidavit and other exhibits attached, vacated the orders against Adamu and NIS.

The judge adjourned the matter until April 25 for report on the Court of Appeal’s decision.

Justice Ekwo had, on Oct. 18, 2021, in a suit filed by Odili against the NIS and its Comptroller General, ordered the immediate release and return of his International passports.

Ekwo had also ordered the NIS to write an apology to Odili for the unlawful seizure of his passport as well as the embarrassment meted to him.

However, about 37 days after the court judgment, the NIS on Nov. 23, 2021, told the court to stay execution because it had appealed the judgment.

In a motion filed before the court, the NIS had sought a stay of execution on the judgement it delivered.

Ekwo, who then adjourned on the condition that the NIS must submit Odili’s passport with the court registrar as a condition for their motion to be heard, fixed a date for hearing the application.

But on the adjourned date, no counsel appeared for the NIS, and counsel to Odili, Adedipe, made an application against the NIS, urging the court to award a fine for their disregard to a court order.