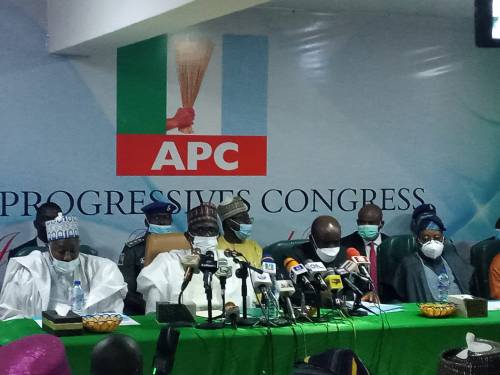 Wonders, they say, shall never cease. Just when you think you’ve heard the last word on corruption in Nigeria, something new comes along to take your breath away.

Many Nigerians have taken to social media to condemn the ambition of the ruling party, All Progressive Congress, to remain in power for eight terms.

The backlash trailed a comment by the Chairman of the National Caretaker Committee of the APC, Mai Mala Buni, that his party hopes to remain in power for eight terms — which amounts to 32 years.

Buni, who is also the Governor of Yobe State, spoke on Tuesday in Abuja at the inauguration of the strategy committee of the party chaired by Muhammad Badaru, Jigawa governor.

The caretaker chairman said the APC would be able to “effectively” improve the lives of Nigerians if it has more than eight terms in office.

“The constitution of the strategy and contact committee, therefore, is to consolidate the achievements we are making in building a strong party with a solid structure that would accomplish APC to stand the test of time,” he said.

“Our vision is to provide a wheel that will drive the party to go beyond sixth, seventh and even eighth term of office to effectively implement the party manifesto, improve the lives of Nigerians and, remain Nigeria’s leading political party.

“This committee is therefore very key to our process of transition towards successful congresses and national convention and, to establish a very solid, reputable and reliable future for the party.”

Buni said the party’s efforts at wooing new members to the party have been successful.

“On the other hand, our efforts in wooing members of other political parties into APC has recorded remarkable and unprecedented successes,” he said.

“Another major milestone we have recorded as a party is the membership registration and revalidation exercise which has given every member of our party a true sense of belonging.

“The membership registration would provide us with the numerical strength of the party and to serve as a guide towards planning.”

The ruling party is currently in its sixth year in power.

Several Nigerians have since reacted to the development on Twitter.

Another Twitter user, @cajetan_uzoma, said, “APC doesn’t mean well for Nigeria and her citizens. They (are) here to steal, kill and destroy. Nigeria has never been this bad, I wonder how these people sleep at night knowing fully well they’re failures.”

For @Mai_YaQi, APC already has been given two terms in office with no significant improvement in the lives of Nigerians. He said, “How come? We gave them two terms but the people are suffering from hunger and scarcity all over the nation. And there is a lack of security everywhere.”

Twitter user, @D_Okee, said, “A party that took Nigeria to the point where we doubt there would be anything like Nigeria by 2023. This same party wants to rule themselves for 32 years.”

@AbimbolaAdemol2 opined that the APC will not do better even if they get twenty years in office. He tweeted, “Lie kill you there, that’s how you people lied to get the power, now you need 8 terms. If you are given 20 terms, you cannot do better because, before that twenty years term, you would have ended Nigeria.”

@otunslaw posted, “If APC uses 80 terms in power, nothing good can come out of the wicked terrorist and banditry government except killings and corruption. #EndNigeriaNowtoSaveLives.”