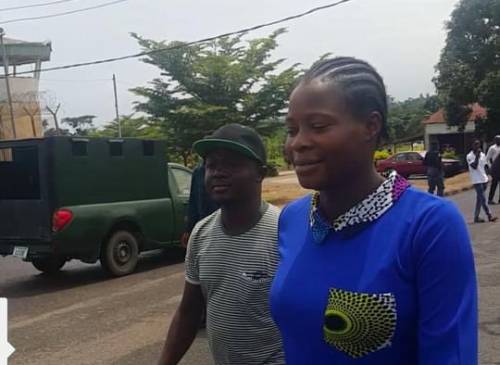 Kemisola was arrested in Akure and has been imprisoned since October 24, 2020, while going to a pharmacy to buy drugs for her mother.

Nigerians on social media have condemned the Nigerian government after the Ondo State High Court sitting at the Olokuta Medium Prison in Akure granted bail to Kemisola Ogunniyi, a nursing mother, of 10 million naira and a surety in like sum.

Reacting, many Nigerians have stated that the federal and state governments were ‘heartless’ to detain Ogunniyi in the first place while also condemning the conditions of her release.

Some social media users, however, praised human rights activist, Omoyele Sowore, for bringing the issue to the limelight, along with other Nigerians who contributed to her release.

Sowore had in a Facebook post last week called on Governor Rotimi Akeredolu of Ondo state to look into the issue, adding that the mother of the newborn was innocent and never committed any offence.

The post by Sowore triggered public outrage, with many Nigerians demanding her swift and unconditional release from detention.

A Facebook user, Prince Hillary wrote, “Wicked government, you mean a pregnant teenager has been detained for over 8 months now. This is the zenith of wickedness!”

Another user, Okofu Daniel Dannyboy posted, “Thank you Sowore for the role you played. I am 24/7 online and saw the pressure you were mounting. Power of press. Be sure you’ll always be hated for the truth.”

Highly Favoured wrote, “Oh may God be praised. God’s blessings to those who made it possible.”

Another Facebook user, Tundey Bakare opined, “Not only to grant bail but also provisions must be made for social welfare benefits in accordance to the UN convention on the child/children right that cannot be taken away.”

Ayo Clement said, “Thanks to those who facilitated her release, God bless you all.

The truth must prevail in this country and innocent people must be set free from bondage.”

Ezeobiorah Chinedu Tonero opined: “A pregnant teenage detained in prison for half a year for expressing her fundamental right, this nation is a joke. I wonder the story she will tell her kid when she grows up.”

First time I came across this news, I was literally in tears. I imagine the scores of innocent people in prison whose voice we haven’t heard..

Kemisola was arrested in Akure and has been imprisoned since October 24, 2020, while going to a pharmacy to buy drugs for her mother.
But she was arrested by the police along with three others whom the police said participated in the #EndSARS protest in the state.

The police claimed they were one of those #EndSARS protesters who burnt the office of the All Progressives Congress, APC, in the state last year, about eight months ago.

The three others are Ayodele Bukunmi, Ojo Samuel and Ani Obinna.

The charges preferred against them were conspiracy to commit the following felonies, to wit: arson, riotous assembly, stealing and malicious damage.
Kemisola was said to have gone into labour on June 15, giving birth to a baby boy the following day.