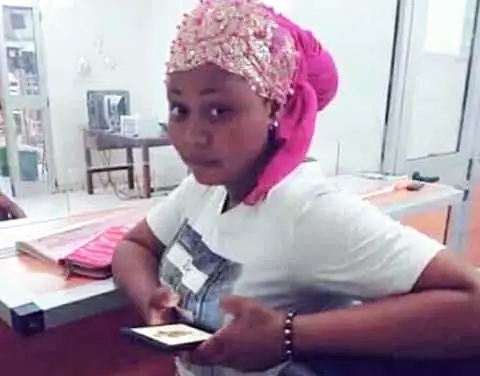 Twenty one year old Ìtùnnú Babalola, jailed for 20 years in Cote D’voire, over a crime she did not commit is dead.

Babalola, who hailed from Oyo State, was accused of human trafficking in Cote D’voire, a crime she never committed. Ìtùnnú was said to have had complications from diabetes and was rushed to a hospital, after which she died a day after.Ìtùnú was a trader based in Bondoukou, Cote d’Ivoire. Her apartment was burgled by an Ivorian on September 2019.

The suspect, who is related to an Ivorian police officer, made away with goods worth about N300,000.Ìtùnnú reported the case to a nearby police station, but the DPO, who is an uncle to the suspect allegedly offered her N100,000 to drop the case.

Eager to have justice, Itunnu went ahead to file charges against him and allegedly used a different name (not her real name) to file the case and somehow a case of robbery, which she filed mysteriously turned to a case of human trafficking against her. She was, however, sentenced to 20 years imprisonment.

On hearing the case, Chairman, Nigerians in Diaspora Commission, NIDCOM, Abike Dabiri-Erewa, told Nigerians that she was working to prove the innocence of Ìtùnnú.

According to her, “Following painstaking investigations by the Nigerians in Diaspora Commission and the Nigeria Mission in Abidjan, Cote d’Ivoire, it is now confirmed that Itunu Babalola, a Nigerian living in Abidjan was wrongfully charged and incarcerated for a crime she did not commit.

“Plans are underway to engage the services of a legal luminary to prove the innocence of Itunnu Babalola at the Court of Appeal after the accused had spent two years out of a 10-year jail term for an offence she did not commit.”

The Federal Government, yesterday, reacted to the death of Itunnu.

Abdur-Rahman Balogun, Head of Media, Public Relations Unit, NIDCOM, in a statement entitled: ‘Death of a Nigerian in Cote D’ivoire, FG demands full investigation,’ explained how NIDCOM had intervened on Ìtùnnú’s case and plans to set her free.

He said: “The Federal Government of Nigeria has demanded full autopsy on the sudden and mysterious death of Ìtùnnú Babalola, a Nigerian, sentenced to 20 years imprisonment in Côte Divoire for alleged human trafficking.

“Chairman, NIDCOM, Dabiri-Erewa, described the death of Itunnu as a tragic blow, at a time the Nigerian mission in Côte Divoire had paid and engaged the services of a lawyer to handle Itunnu’s appeal case.

“Unfortunately, Itunnu died suddenly, while all hands were on deck to seek both legal and diplomatic intervention for her by Nigeria.

“Itunnu was sentenced to 20 years imprisonment for an offence she did not apparently commit. Itunnu had accused an Ivorian of robbery at her residence and insisted on filing a case against him.

“The accused who happens to be related to an Ivorian policeman, asked her to drop the case, but she refused. Itunnu went ahead to file charges against him and allegedly used a different name (not her real name) to file the case and somehow a case of robbery, which she filed mysteriously turned to a case of human trafficking against her.

“She was sentenced to 20 years imprisonment while the Nigerian Mission in Cote D’Ivoire supported by the Nigerian community, got her a lawyer, paid part payment of legal fees for the lawyer, to appeal the judgment, while at the same time seeking diplomatic intervention from the Nigeria Ministry of Foreign Affairs.

“The staff of the Nigeria Mission had also visited Itunnu in prison, a distance of over four hours from Abidjan. While the appeal case was on, Itunnu was said to have complications from diabetes and was rushed to the hospital.

“The fees for the treatment was paid by the Nigerian Mission through the lawyer, whose services were engaged by the mission, unfortunately, she died suddenly after a few days of admission at the hospital.”

A day after being declared missing, young girl found dead in neighbor’s cooler