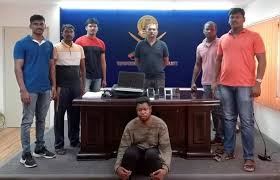 A 42-year-old Nigerian national identified as Eze Fidelis Ndubuisi has been handed a jail term in India for allegedly duping an exporter to the tune of N20m using fake websites.

The accused, who resides in Navi Mumbai, Maharashtra, was arrested by the cyber crime police from Thoothukudi, Tamil Nadu and sent to Puzhal Central prisons on Sunday, police said on Monday, January 2, 2023.

According to the complainant, Panimaya Gladwin Manoj (38) of the Housing Board in Thoothukudi, he received an order claiming to be from Vetis Animal Health Industry in Togo, to supply the firm with pharmaceutical products manufactured at Sharma Enterprises in Maharashtra and Krishna Industries in Sikkim.

When Manoj contacted the number, the person at the other end gave finer details and asked for payments in stages.

When Manoj sent them through the link, the money got transferred from his bank account. However, few days after he did not receive any confirmation about the consignment being booked, he approached the police.

Preliminary inquiries revealed that the suspect had created fake websites in the name of Sharma Enterprises and duped the exporter.

The police nabbed the suspect from Ulwe Node in Navi Mumbai on December 29, 2023.

The team also seized a laptop and three mobile phones used for the crime. Based on the confession, they registered a case of cheating under IPC Section and other cases.

The accused was brought to Thoothukudi and produced before a magistrate court on January 1, after which he was taken to Puzhal Central Prison in Chennai for judicial custody.

“Our inquiries have revealed that Ndubuisi is part of an extensive online racket and they have created various fake websites to dupe traders. Further investigation will shed light on more crimes they have committed,” a senior officer said.