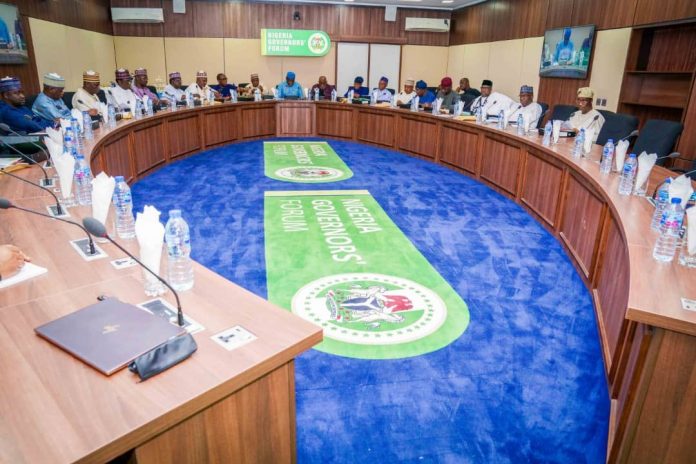 The Nigeria Governor’s Forum (NGF) on Tuesday pledged to see to the implementation of the financial autonomy of both the judiciary and legislature in the various states, but opposed the Executive Order 10 issued last year by President Muhammadu Buhari to guarantee the independence of the two arms of government at the state levels.

Speaking through Governor Simon Lalong of Plateau, the forum said governors did not require the Executive Order to implement the financial autonomy of the two branches of government.

Mr Lalong, representing the Chairman of the NGF, Governor Kayode Fayemi of Ekiti State, addressed journalists after a meeting of the forum with French Minister in charge of Foreign Trade and Attractiveness, Frank Riester, in Abuja.

Judiciary workers, under the aegis of Judiciary Staff Union of Nigeria (JUSUN), have been on an indefinite nationwide strike since April 6 in protest against non-implementation of the judiciary’s financial autonomy provided for in the Nigerian constitution and affirmed by a January 2014 judgment of the Federal High Court in Abuja.

President Buhari, had in May 2020, issued the Executive Order 10 for the enforcement of the newly amendment

provision of Section 121(3) of the constitution which places the budgets of both the judiciary and legislature at the state level in the first line charge.

The status qualifies the two arms of state government to receive the funds standing to their credit directly from the federation account.

Mr Buhari’s Executive Order issued for the enforcement of the said section 121(3) of the constitution, empowers the Accountant-General of the Federation to deduct from the allocations due to states in the federation accounts, and pay the deducted funds to state legislatures and judiciaries whenever such states fail to release the allocations to the other arms of government.

State governors who are the main target of the ongoing JUSUN strike because of their failure to comply with the financial autonomy status of the judiciary, had rushed to court last year to challenge the legality of the Executive Order.
The News Agency of Nigeria (NAN) reports that Mr Lalong, while speaking to journalists on the ongoing JUSUN strike on Tuesday, said state governors were not against financial autonomy for the judiciary but against the Executive order.

He, however, said that certain criteria had to be put in place, for financial autonomy for the judiciary to commence at the state level.

“You don’t wake up one day and say you are doing financial autonomy, because a law is passed, there must be processes.

“For instance, as a former Speaker, I will tell you that you cannot do financial autonomy until you establish a service commission. You must establish a state Allocation Committee. All these are steps towards autonomy.

“You don’t achieve autonomy in a day. We did it in the National Assembly, and there was no Order 10 for implementation. It took them stages. The federal government is aware.

“Members of the National Assembly, who are governors today, were members who fought for the autonomy, so how can we be against the autonomy?” Mr Lalong asked.

Mr Lalong said governors were already consulting with union leaders, adding that the NGF would be meeting with them on Wednesday, “to finalize the issue”.

JUSUN STRIKE: IS THE JUDICIARY TOTALLY HELPLESS? WHAT DOES THE ACJA 2015 SAY by Bayo Akinlade Esq