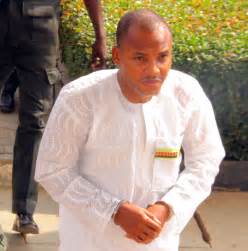 The leader of the Indigenous People of Biafra, Mazi Nnamdi Kanu, on Wednesday disclosed that the Federal Government offered him Biafra Republic while in prison with only the five South East States as the component parts, but he rejected it.

According to Kanu, he rejected it because that did not constitute the complete Biafra, adding that he told the Federal Government that he wanted a Biafra with Rivers and Benue States inclusive.

The IPOB leader also claimed that he was offered an oil block and mansion in Dubai, aimed at making him to abandon the cause, but that he rejected them and insisted on the actualization of Biafra.

Kanu said those things were Greek gifts to buy him over and maintained that he has no price other than to actualize the restoration of Biafra Republic and liberate the Igbo.

“They gave me Biafra in prison with only the five Igbo states; I said no, I want Benue and Rivers,” Kanu said, pointing out: “Biafra is coming, there is nothing to stop it.”

Kanu, who spoke when leaders of Igbo Civil Society Coalition, led by Prof. Obasi Igwe, paid him a solidarity visit in his Umuahia, Abia State home, also gave knocks to Igbo elites for their anti-Biafra activities, saying that they have no interest in the Igbo masses.

He lambasted Igbo elites who he said are bent on scuttling the Biafran agitation, saying they were doing so for their selfish interest and challenged them to show the Igbo masses what they have been able to do for them since their romance with Nigerian Government.

He said they would not succeed.

Kanu lamented the deplorable condition of roads in Igboland and general lack of social amenities and wondered what the elites have been doing in Abuja other to fight for their self interests.

He further dismissed Igbo elites whom he said had thought he could be bought over, saying he has no price tag.

He said: “They can’t buy us with money. If I can turn down oil block, turn down mansions in Dubai, what can they offer us? All the roads in Biafra land are in deplorable condition, yet we have elites who are just interested in their pockets.