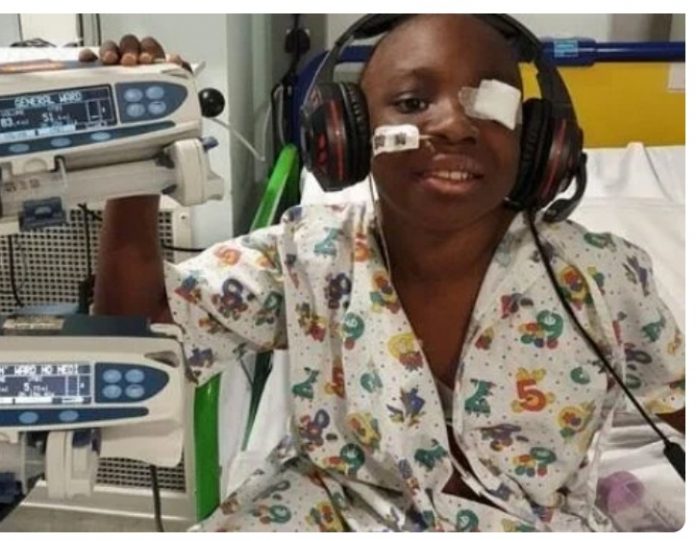 Nathaniel Nabena, a nine-year-old Nigerian boy, has been declared cancer free after readers of Sunday People, a UK newspaper, raised £216,000 for his treatment.

According to the newspaper, Nabena had come to the UK from his hometown in Bayelsa, Nigeria, in September 2020 to get a prosthetic eye after his left eye was removed owing to cancer — myeloid sarcoma.Nabena reportedly suffered nosebleeds and a fever and was taken to Croydon University Hospital where he was diagnosed with acute myeloid leukemia.The nine-year-old’s family were initially told the total cost of treatment will be up to £825,000 because of UK laws which warrants patients who live outside the EU to be charged 150% of the national health scheme (NHS) national tariff.

As a result, Ebi, his father and Modupe, his mother, applied to the Home Office for leave to remain in the UK on compassionate grounds, so their son will be allowed to have access to NHS care.The newspaper said it then revealed the situation to its readers who helped raise £87,000 for chemotherapy, which improved Nabena’s condition to the point where he became eligible to get the transplant.The doctors were able to lower the cost after he responded better than expected, meaning he did not require as much chemo.

And in April, consultants at Great Ormond Street waived their private fees to help him, bringing the transplant cost down to £201,103.The family then made an appeal on television which enabled them surpass their monetary target for the bills left.Nabena’s father said: “It is a miracle. Nathaniel has another shot at life. We are so grateful to the British public for helping us turn things around when we thought that all hope was lost.”Nabena spent three months under the care of the top kids’ hospital. But he was allowed to go home after doctors said there are now no traces of his acute myeloid leukemia in his system.